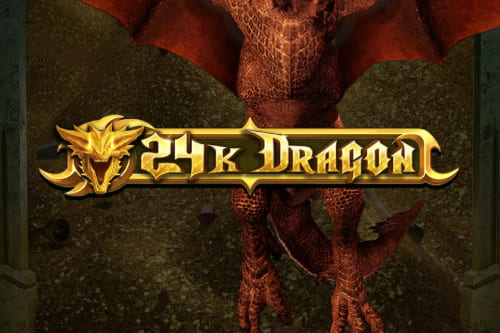 Play’n GO has recently added a new game to its lineup of video slots. The fresh launch not only promises to deliver lots of excitement but can also lead to staggering payouts.

Get Ready for a Fantastic Adventure

Boasting exceptional visuals, 24K Dragon comes with 1,024 ways to win and is accompanied by an immersive soundtrack that is sure to add to the excitement and help create a memorable playing experience.

Set on a five-reel grid, the game can be played across all platforms, with betting options ranging between $0.20 and $100 per spin. The average Return to Player is 96.20%,

The list of symbols includes Royals, a lion with a blue gem, other brightly coloured gemstones, crossed swords, and two dragons, with the latter awarding a prize worth five times the bet for all five across a payline. The Wild symbol will appear only on the three middle reels, substituting for other regular icons and sometimes awarding multipliers of 2x and 4x.

Land a golden dragon symbol during the Main Game to receive a respin. This respin has a higher winning potential as up to four rows can be added to the grid.

At least three Scatter symbols are needed to activate the Free Spins bonus round. Depending on the number of icons used to start the feature, you’ll get eight, fifteen or twenty spins. The bonus round begins on the standard grid while getting enough dragon symbols will unlock additional rows, which will be in play until the round comes to an end.

Dragon symbols will also increase the number of ways to win. With a bit of luck, and with 15 of them, you can get 8,192 different ways to win!

While the bonus round is active, the Wild symbols will always appear with a multiplier. Get more than one Wild to combine the values of their multipliers, with 64x being the maximum. Two or more Scatter will add more spin to the count.

The recently-launched Play’n GO game offers exciting features and fantastic payouts. With beautiful graphics and exceptional soundtrack, the slot will deliver hours of entertainment. 24K Dragon is waiting at online casinos powered by the renowned developer.