A Plethora of Titles to Join Microgaming’s Portfolio in October 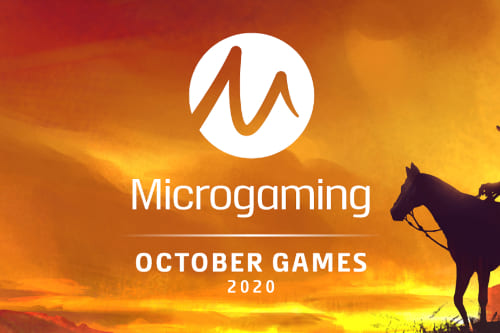 Fans of Microgaming’s video slots can look forward to an exciting October, as the renowned developer has prepared a myriad of thrilling new releases.

From exploring the jungle to claiming progressive jackpot prizes, players better get ready for a roller coaster of fun thanks to the company’s rapidly-growing network of exclusive partners.

The first new title to have been launched this month is African Legends, developed together with Slingshot Studios. This is the latest addition to Microgaming’s progressive jackpot network, which has paid out more than €1 billion in prizes since its inception.

Set in the great African plains, the game comes with 243 ways to win and lots of other interesting features, such as the Wild Blast multiplier and the recently revamped WowPot jackpot, which has awarded more than €16 million since the start of 2020.

The game will include the popular Rolling Reels mechanic, where symbols explode on the reels to create multiple winning combinations within just one spin.

The next Microgaming’s slot scheduled to hit the market is Western Gold. Set to go live on October 13, and developed by Just For The Win, this release promises to take punters to a Wild West-themed adventure. Boasting high volatility and features like golden Wilds and Free Spins, the game will also offer huge win potential.

777 Royal Wheel will arrive on October 15, featuring a classic casino theme. Played on a standard reel set, the game will feature a randomly triggered wild reel, lots of respins, as well as multipliers of up to 24x.

Following the huge success of the developer’s first Tarzan-branded slot, launched back in 2016, Microgaming will release a new one thanks to a new licensing deal with Edgar Rice Burroughts Inc.

Titled Tarzan and the Jewels of Opar, the upcoming release will draw its inspiration from the eponymous 1918 novel, and will also go live on October 15. This high-volatility slot promises an unforgettable adventure set in the city of Opar, where players will join forces with the famous character to uncover precious jewels and hidden riches.

The game offers plenty of free spins with multipliers, as well as payouts reaching 5,000 times the bet.

Wanted Outlaws is another Wild West-themed game that will be joining Microgaming’s lineup of slots this month. Developed by All41 Studios, it will be released on October 27, featuring Nobleways mechanic, 3,125 ways to win and hefty wins of up to 200 times the bet in the Free Spins round.