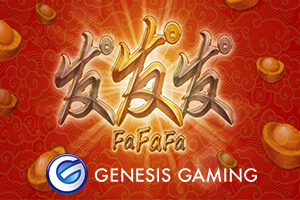 Come the New Year, and Genesis Gaming will have three new games in their successful portfolio, according to the previews we’ve gotten from the company in the second half of December 2017.

It seems like the software provider chose to kick off the year with brand new projects and start a new chapter with excitement and enthusiasm. Genesis Gaming has been on the market since 2008, and they’ve earned their prominence with flexible gaming content and high-performing gambling solutions. They are featured at more than 50 online casinos and often have fresh releases inked in for future periods.

Right now, Genesis Gaming is about to release not one, but three new video slots. Come January, and Genesis fans will be able to try out FaFaFa, Fire & Ice Island and Da Hong Bao. Each of the announced games is unique, entertaining and profitable; it’s only a matter of taste and theme preference.

What are the New Slots All About?

FaFaFa is a striking slot machine with 3 reels and 1 paying line, so a traditional piece of casino entertainment. Instead of fruit and bells, FaFaFa comes with authentic Asian symbols that you need to line up to win.

Fire & Ice Island slot is inspired by manga art. It tells a story about a hidden treasure chest that keeps the secret of controlling fire, ice, and energy. You will be entrusted with the task of protecting the chest and preventing it from falling into evil hands. Fire & Ice Island is a 243 ways to win slot with free spins and an Expanding Wild.

Ultimately, Genesis Gaming will release Da Hong Bao, a 50-payline slot with lavish design and engaging features such as Re-Spin and Free Spins. In Ancient China, God of Wealth showered people with a blessing and good fortune, so if you want the same treatment you’ll have to give Da Hong Bao a try in January 2018.

Visit Mr Green to enjoy the new video slots by Genesis Gaming in 2018!