Hacksaw to Launch Slots with up to €50M Progressive Jackpots 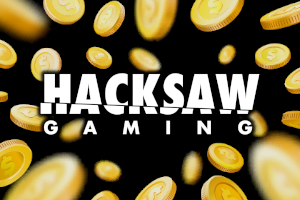 Hacksaw Gaming has announced that they will be launching slot games with progressive jackpots going up to €50 million. The first game with the new concept featuring a massive, insured jackpot worth €25 million will be My Lucky Number. Stay with us to learn more about Hacksaw new products that will offer far larger prizes than those available in the market.

The biggest progressive jackpot hit online ever is €18,915,872.81. It was triggered in September 2018 on the popular million-maker Mega Moolah. According to the press release published on Hacksaw Gaming’s official website, we can expect slots games that will offer jackpots worth €25 and €50 million. The new concept will be launched with the My Lucky Number slot that will feature a top prize of staggering €25 million or equivalent in other currencies.

“With our new concept, operators can rely on having huge, exciting jackpots on offer without having to wait for the progressive jackpot to build up,” said Cordes.

He added that the new concept of progressive jackpots would allow smaller operators to offer the prizes that will be as huge as those provided by the Tier 1s.

Hacksaw Gaming, a Malta-based software developer established in 2018, has big plans for this year. One of them is to release new games with even higher prizes, including those that will feature jackpots as high as €50 million. Those who enjoy smaller pots will have a chance to play slots with €10 and €5 million, which will also be launched in the months to come.

So far, Mega Moolah by Microgaming and NetEnt’s Mega Fortune have paid record-breaking progressive jackpots when it comes to online gaming. It remains to be seen whether a Hacksaw slot will be the next game to enter Guinness World Records with the highest online slot game win.