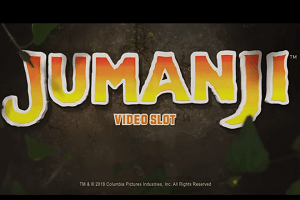 Fans of the popular Jumanji movie, released in 2017, will be pleased to know that NetEnt is about to release a brand new game themed after this bestseller written by Chris Van Allsburg. All of you who had the chance to watch the movie, or read the book know that there is plenty of action and excitement incorporated, so we can only expect an action-packed video slot!

The latest movie serves as a sort of a sequel to the original Jumanji film released in 1995, and it also makes a tribute to the departed star of the original film, Robin Williams, so there is no doubt that the highly-anticipated video slot will also offer a spark of comedy, provided that NetEnt decided to stick to the original as much as possible.

In the popular movie, four teenagers are transported into the video game world of Jumanji, and they are playing as characters they chose, so it would be really neat to see Dwayne Johnson, Jack Black, Kevin Hart and Karen Gillan in the upcoming NetEnt product. The original movie is packed with action, fun and excitement, so it would be a real shame if the video slot does not follow the theme completely. Of course, we do not expect that gamers will be in danger of all the wild animals included in the plot, but we do hope that the crisp graphics and the fitting soundtrack will make all players feel as if they are actually transported into this exciting game, which would definitely chain them to their seats for hours.

Accomplished tasks will certainly be followed by an exciting soundtrack, and we suppose that the tasks in the form of Bonus games will keep everybody busy. In the slot version of the story, we expect to win big once we escape the bloodthirsty animals, so we will not be running for our lives, but for insane payouts.

While Waiting for Jumanji, try out Twin Spin Deluxe

For now, we can only wait for the slot to be released, and while we wait, we can always kill the time with the latest NetEnt title, called Twin Spin Deluxe, which is a sequel of the popular Twin Spin video slot, a six-reel, five-row slot that offers cluster pays, Twin Reel feature and payouts up to 1,000 times the bet.

Check out Casino Bloke’s selection of top NetEnt casinos where you can enjoy Twin Spin Deluxe, Jumanji and many other premium titles from the Swedish software provider.

Alternatively, the list of best-paying NetEnt slots is also at your disposal.