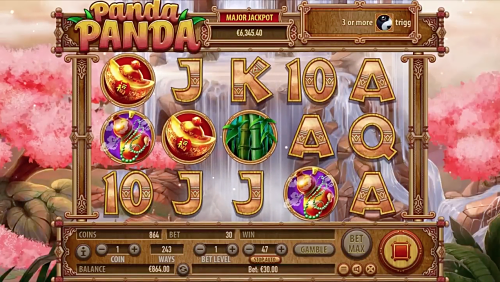 Habanero Systems, an online gaming company established in 2012, has launched another online video slot which will take you to the Far East with pandas and bamboo trees occupying the reels. Played at 5 reels and offering staggering 243 ways to win, the Panda Panda slot is loaded with exciting bonus features and provides players with multiple winning chances along with supreme graphics and visuals. Besides regular payouts, Panda Panda slot provides gamers an opportunity to hit no fewer than 5 progressive jackpots which make the game even more attractive.

As you can guess, Panda Panda is another Asian-themed slot machine. No matter how the online gaming market may be saturated with the slot games using this theme, Panda Panda is a breath of fresh air due to its beautifully rendered 3D graphics and smooth animations. If you have been wondering where pandas live, this slot will provide you with answers to that question as the set of transparent reels is set against the beautiful landscape with flowering cherry trees and a waterfall, while hitting big wins will unlock a path to pandas’ habitat hidden within a bamboo forest.

As for the reels, they are populated with cherries blossoms, items related to Chinese culture, waterfalls and bamboo trees. The panda symbols also appear on the reels, so get ready to meet a shy panda hiding his face resembling the Yin Yang symbol. The shy panda will transform into a confident giant bear key for high payouts right in front of you. Appearing in stacks and covering your reels entirely with symbols of a kind, Pandas will make your day.

Pandamonium on the Reels

It is not pandemonium, it is pandamonium taking place when pandas start swarming on the reels. Not only that they will appear in stacks to cover your reels in their entirety, but these gorgeous creatures will also double themselves to provide you with even more lucrative payouts. This feature is triggered at random and adds even more excitement to the gameplay.

With the Panda Panda slot you can create winning combinations left to right and right to left, which is another advantage of the game. When you land 3 Yin Yang symbols on adjacent reels, you will get a chance to win both ways for free as these symbols trigger the free spins feature with at least one Wild guaranteed on each spin. At any point of the game players can hit a Mini, Minor, Major, Mega and Grand jackpot.

The developers have made the most of the Asian theme and you will be taken away by the game once a huge win is hit as pandas will slide down bamboo trees under the showers of gold coins. The overall appearance of the game is really impressive with a variety of icons symbolizing good luck and well-being. You’ll hardly find a person who doesn’t fancy pandas, so we expect the game to be a huge hit among slot players.

This is the fourth slot release in 2017 from the relatively young software provider planning to enrich its slot portfolio with 10 new games this year. So far, Habanero Systems has launched 75 video slots, 50 video poker titles and 9 table games offered by 45 online gaming operators. Being available in various world languages, their games target the European and Asian markets.

Leading online casinos have only recently started adding Habanero games to their impressive portfolios, but you can play Panda Panda slot at BitStarz Casino.