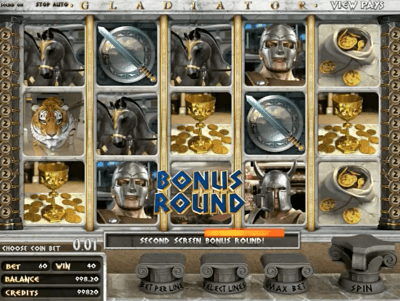 This year will definitely be difficult to top for one lucky player who recently woke up from his sleep, only to discover that he managed to hit no less than £1,371,621.6. For most of us who would rather stay in bed in the morning, this is definitely a dream come true and one extra reason to remain a firm believer.

It was Playtech that created an instant millionaire this time and the game that delivered is no other than the movie inspired Gladiator Jackpot, which the winner played on Slots Heaven Casino.

Curiously enough, David, a father of two, opened his account only four days before the amazing stroke of luck hit him. While still in a state of shock, the winner stated that the money would be invested towards his sons’ future and that no extravagant plans were being made.

Looking at it from a distance, it’s safe to say that the entire event seems written in the cards, which seems like an appropriate analogy under the circumstances.

The Arena is No Place for the Weak!

As far as Playtech is concerned, the latest hit is just one of many; their other progressive slots such as Beach Life, Funky Fruits, and Jackpot Giants have had their fair share of winners and new jackpots are being paid off every 30 weeks or so.

So far, the developer’s highest jackpot was won in 2012, when a player from South Africa hit over $8 million on Beach Life, the progressive slot with the best hit frequency.

Gladiator is just behind it, generating its biggest payout (so far) of $3.2 million in 2013.

In light of recent event, there is no doubt that hordes of new players will head straight to top Playtech casinos and try their luck on Gladiator, which is a pretty decent slot even if we set the hype aside. With 25 adjustable paylines and a betting range of $0.10 to $250, Gladiator can produce around 94.9% RTP, which is to be expected for progressive slots.

Gladiator Mask icon will unlock Gladiator Jackpot Bonus, where 9 gold Helmet symbols trigger the jackpot, and, if you need something to spice things up while waiting on the big hit, Gamble feature will potentially double every amount.

If you also hope to land one of Playtech’s impressive progressive jackpot, bear in mind you can play their games at Mr Green, LeoVegas and Omni Casino, three gaming venues that come highly recommended by Casino Bloke.