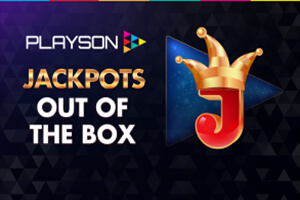 Malta-based software developer Playson has announced that they have created integration-free jackpots. The launch of the promotional tool will facilitate the delivery of their slot games for new and existing operator partners.

According to the press release published on Playson’s official website, the developer’s popular jackpots – Mystery, Multilevel and Daily – can now simply be switched on. It means that they no longer require a costly and time-consuming additional integration. Thanks to it, promotional tools are now instantly available alongside Playson games.

Head of Account Management at Playson Michael Tadross said that they were delighted to offer the innovative, “out-of-the-box jackpot feature” to online casinos.

“We pride ourselves on constantly asking how we can do even more for our partners, and it’s great to see our hard work pay dividends with this innovative new tool,” added Tadross.

The slot developer has recently also announced that they signed an agreement with Royal Panda Casino. According to it, the entire suite of popular Playson titles will be available at the reputable online casino.

Royal Panda customers can now enjoy the latest releases such as Clover Riches, Solar Queen and Vikings Fortune: Hold and Win. The classic slots from the Timeless Fruit series are also available.

Blanka Homor, Sales Director at Playson, said that the new deal followed a string of strategic commercial moves by Playson that were part of its long-term strategy for global growth.

“It’s another fantastic step in strengthening our brand with the best operators, as well as further progression in our aim to be one of Europe’s leading suppliers,” said Homor adding that they were always striving to further the reach of their games.

Commenting on the deal, Managing Director at Royal Panda Melvin Ritsema said that Playson was well-respected in the industry and that their games would complement their portfolio.

“I know our players will enjoy the company’s latest titles and, like us, will also look forward to seeing what else they have in store over the coming months,” added Ritsema.