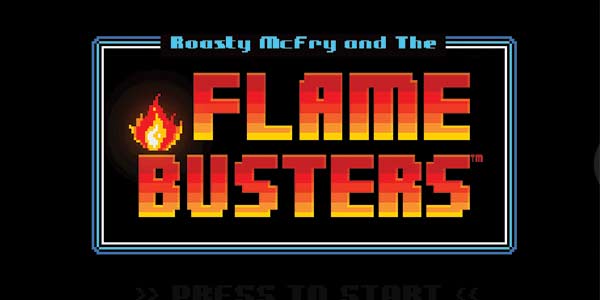 Thunderkick is a relatively young company on the market, but it has drawn attention to its titles mainly due to its unique approach.

The games signed by Thunderkick are innovative in terms of design and gameplay, while keeping the traditional core of the video slot games.

The same goes when it comes to the company’s latest release, which can easily be confused with an indie video game, or if you’re a bit older – with an 1980’s style arcade.

Roasty McFry and The Flame Busters slot game is coming on May 17th and is retro to the bone. But though its visuals and audio are old school, this five-reel video slot with 243 fixed paylines offers innovative features and numerous ways to win hefty payouts.

So join Roasty McFry and other firefighters and help them save people from a burning building, and while you’re at it, try to win as much as you can.

Flame Busters is definitely an entertaining title, but since it’s a high volatility game, it can be very rewarding when it comes to payouts. You can win up to 5,280 times your stake on each spin – which will sound more than appealing to high rollers out there.

The symbol containing the letter ‘W’ is the Wild, substituting for all other symbols except the Scatter. Alarm Bell is the Scatter, and landing 3 or more of them activates the Bonus Game. Depending on the number of landed Scatters, the player will receive 10, 15 or 20 Free Spins.

During the round, player can advance upward in the Bonus Game building. Each new floor is unlocked, after 3 Scatters are collected and 2 additional Free Spins are awarded.

We must mention the Fire Symbol which, when landed on the reels, is replaced by any other symbol except the Wild and the Scatter.

But that’s not all that Flame Busters has in store for us. During the Bonus Game, the Coin Ignition feature turns the lowest-value symbol the Fire Symbol which stays on the reels until the Bonus Game ends.

Fire Drill is a feature triggered in the Main Game, and when active it can turn up top 5 low-value symbols into the Fire Symbol.

The company was founded in 2012 and its philosophy is quite simple – create games that offer better gaming experience. Today, Thunderkick has offices in Sweden and Malta, along with UK and Maltese licenses.

The hard working developers give their best to make mechanics, graphics and audio function as one, in order to produce high quality titles that offer hours and hours of entertaining and rewarding playing time.

If you cannot wait to give the Flame Busters slot a try, you will be able to do so at CasinoRoom, Rizk Casino or Ikibu Casino as soon as it goes live on 17th May.