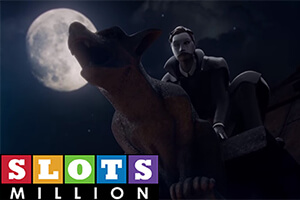 On 24 January, NetEnt will launch the online video slot Universal Monsters: The Phantom’s Curse and you can get 50 free spins if you register with SlotsMillion to give it a try.

After the 2017 initial title The Phantom of the Opera ran into some licensing issues before its launch, NetEnt had to rename the slot created under the Universal Studios licence. The branded title is based on the 1920’s silent horror movie, and it takes you to an opera theatre where the action takes place.

Boasting impressive graphics and smooth animations combined with a cinematic soundtrack, the slot uses a 5×4 layout with 40 fixed payines which both ways. It benefits from stacked symbols, Wilds, a Pick-and-Click bonus game, free spins and a random Phantom Re-Spin feature.

When it comes to symbols, clubs, spades, hearts and diamonds constitute the lower ends of the paytable while knives, white pearls, yellow roses and ruby rings award mid-value prizes. The top paying icons are portrayed as Christine and the Phantom.

The Masked Phantom Re-Spin feature is triggered when a double-stacked Phantom symbol lands on reel 1 and 5 at the same time. The Phantom symbols along with the Bonus Stacked and Mask symbols transform into Wilds and stay in their positions during a re-spin.

When you bring together double-stacked Phantom and Christine icons on the reels 1 and 5, you will trigger the 2-stage Pick-and-Click bonus game which can award up to 7,200 coins. Finally, Chandelier Scatter triggers an innovative free spins feature by hitting the reels 1, 3, and 5 simultaneously. The chandelier hangs above the reels and every time the Phantom symbol appears, a respective section of the rope is cut. The Phantom assumes a role of Wild during free games. If the Masked Phantom symbol lands on the reels and cuts the rope section, all Masked Phantom symbols on that reel become sticky and stay in their positions for the duration of the feature.

All new users who register with SlotsMillion between 24 January and 5 February can get 50 free spins on The Phantom’s Curse slot. Sign up with the casino and enter the promo code PHANTOM to get 50 free spins credited to your account on your second deposit.

Visit SlotsMillion and get 50 free spins on the brand new NetEnt release!