Yggdrasil Hosts Summer Fiesta with €60,000 up for Grabs 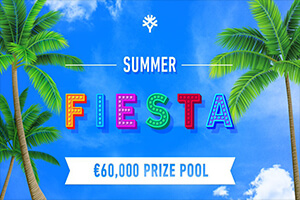 This August, Yggdrasil Gaming celebrates summer with a campaign taking place across online casinos offering their slots machines. Over 10 days, players who join Summer Fiesta can win a share of €60,000 by participating in a special jackpot drops and missions. If you like Yggdrasil slots like we do, stay tuned for more details about the campaign.

The Summer Fiesta campaign runs between 8 and 18 August. During this period, players who take part in the special jackpot drops and mission on popular Yggdrasil slots can win a share of the €60,000 prize pool. The campaign is divided into two parts. To participate in the first part of the campaign, players should simply load one of the participating games and place a bet for a chance to win one of the cash rewards. They include three whopping jackpot prizes as well as several jackpots. The qualifying games include the recently released progressive slot Jackpot Raiders as well as Ozwin’s Jackpot and Holmes and the Stolen Stones.

As for the second part of the campaign, it is dedicated to missions. During it, players will have to complete objectives in the qualifying games. This will earn them points towards the leaderboard. By climbing up the leaderboard, they can win one of the 400 prizes. The qualifying titles include Vikings Go Berzerk, Spina Colada, Wild Robo Factory and the upcoming release The One-Armed Bandit.

According to the good people of Yggdrasil, Summer Fiesta combines all the best gameplay to satisfy any player preference thanks to colourful vibes and a considerable prize pool. When it comes to operators, it requires no set up from them while all prizes are covered by Yggdrasil.

Ana Georgieva, Head of Player Marketing at Yggdrasil, said that for 10 days in August, Yggdrasil games would have the power to make their players’ summers very special and it couldn’t be easier for operators to facilitate the campaign.

“Combining huge jackpots and fun missions, our Summer Fiesta has something for everyone and we can’t wait to have a great time with our fans,” said Georgieva and added that the campaign would surely make someone’s summer holidays better and bring a lot of smiles.

Visit our dedicated page to find some of the best Yggdrasil-powered online casinos and get ready for Summer Fiesta with €60,000 up for grabs!