Online slot players don’t have an easy job when choosing a game to play. Modern slots boast stunning graphics, innovative game mechanics and offer an unparalleled playing experience. They have varying volatility and different betting options, but in the end, one factor has the power to tip the scale. That’s payout percentage, a number that indicates a slot game offers more frequent payouts. And playing slots is all about winning, let’s face it.

The German game maker Gamomat has been in the business since 2008. The company manufactures gaming cabinets for land-based casinos, but it’s best known for its online slots. Fans of Gamomat releases have an extensive portfolio of titles to choose from. When it comes to high RTP, the renowned developer may not be the first name to come to mind. However, that doesn’t mean there aren’t any games that have the potential to reward players on a regular basis.

If playing games with high RTP is your thing, then here are some Gamomat titles worth checking out as soon as possible:

Launched in 2020, Crystal Strike comes with a familiar design, while the higher win potential and volatility further add to the excitement. The slot is played on a five-reel, four-row grid with twenty paylines. With an above-average RTP of 96.17%, players can look forward to claiming payouts of up to 2,500 times their stake. It’s an action-packed release with a wide selection of features to help slot enthusiasts have a great time.

When it comes to wagering options, a bet of just $0.20 is enough to spin the reels, while the maximum amount of money you can spend per spin is $100. Crystal Strike is a highly volatile release, although those willing to risk a bit can hope to win up to $250,000.

The game revolves around Energy Spheres symbols, powerful icons capable of activating a respin feature. Large blocks of Wilds come into play here, covering entire reels to help players scoop staggering rewards. Be on the lookout for the Sphere Wilds, which stay sticky for the duration of respins. Two or more of these icons can join their forces to turn multiple symbols wild. Unfortunately, you won’t be able to trigger the feature that often, so you have to rely on regular winning combinations to deliver wins most of the time.

Crystal Strike can be played at many online casinos, including Genesis, JetBull, SlotsMillion, and Playamo.

Monkey Mania has a lot to offer to slot enthusiasts of all types. The slot has beautiful graphics and rich gameplay that promise an entertaining experience filled with lots of action. The game takes place deep in a lush jungle, on a five-by-three reel set with ten, twenty or thirty paylines.

The slot has medium volatility and an RTP of 96.17%. Available stakes range from $0.10 to $18, depending on the number of active paylines.

Monkey Mania is a feature-rich release, giving slot lovers plenty of opportunities to win cash prizes. For starters, there is the Free Spins round, triggered whenever three Scatters land on the reels. In addition to an initial batch of ten spins, you can add more to the count by landing more Scatter symbols. Wilds appear stacked, covering an entire reel to allow more handsome wins and extra winning combinations.

If that’s not enough, the game offers two gamble features. Both are available after a winning spin. The first feature gives players the chance to double their prize by guessing the colour of a card. The other will see them go up a rope ladder to either double their winnings or lose everything.

The list of casinos where you can play Monkey Mania includes such popular sites as Genesis, JetBull, SlotsMillion, and Playamo.

The Land of Heroes is a Norse-themed slot, played on a five-by-three grid with ten or twenty paylines. The slot’s design is quite good, with the action taking place in a three-filled valley. On the reels, you’ll encounter the mix of usual playing card symbols and icons related to the game’s theme.

The epic adventure starts with a wager of $0.10 or $0.20. On the other hand, the maximum payouts reach $20 or $40 per spin, depending on the number of selected paylines.

The highest-paying symbol is the Wild, with five of a kind delivering a payout worth 50 times the bet. Apart from this, Wilds also replace all symbols except the Scatter to help form additional winning combinations.

Three or more Scatters activate the Free Spins round, awarding a cash payout and seven spins. But the round comes with a twist, as up to four symbols can turn into Wild before it begins. They remain Wild until the bonus ends while landing additional Scatter rewards players with another seven spins.

The slot comes with medium volatility and a payout percentage of 96.17%.

JetBull and SlotsMillion are some of the most popular online casinos where you can play The Land of Heroes. 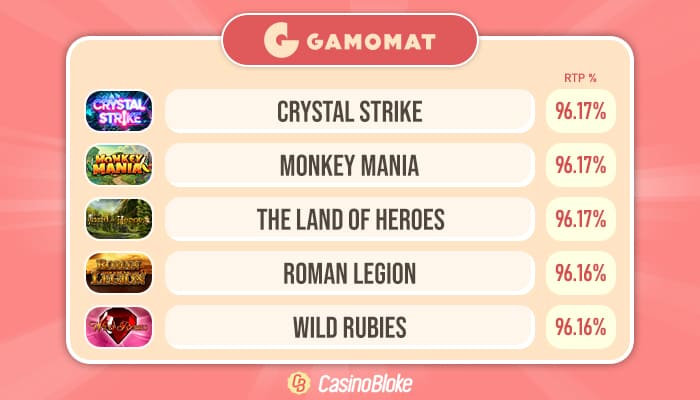 It’s time to take a trip back in time in this Roman-themed slot with five reels and five paylines. With the reels set against a backdrop of a legion camp, players will encounter symbols matching the game’s theme. In addition to playing cards, there are coins, a golden eagle and legion banners, with only two of a kind needed to deliver a win. Get five legion banners to receive the payout of 200 times your bet.

There’s also the Wild, substituting for other regular icons to help form additional winning combinations. The symbol also awards handsome prizes, with five of a kind paying 500 times the stake.

Landing three or more Scatter triggers the Free Spins bonus, awarding ten spins. Every Wild appearing during the round remains in its place until the end of the free spins.

In terms of the variance, Roman Legion is the medium to high range, while the slot’s return to player is at 96.16%. That’s slightly above the industry average.

The legion awaits at any online casino powered by Gamomat. We recommend visiting such popular gambling sites as Genesis, JetBull, SlotsMillion, and Playamo.

Wild Rubies is a classic-themed game played on a five-reel grid and offering a total of ten paylines. The game is as retro as it can get, with a plain purple background populated with familiar fruity symbols. Players will encounter plums, lemons, cherries and oranges, which award a payout of ten times the bet for all five across a payline.

Grapes and melons are more generous, delivering payouts of up to twenty times the bet. Bells and bars follow, with 25 times your stake for five of a kind. Double bars and lucky sevens are the most valuable regulars, awarding players a payout of fifty times their bet when landing five matching icons.

The Wild substitutes for all other symbols, paying 200 times your wager for five of a kind across the reels. Wilds also appear stacked on the reels. And that’s pretty much it, as there are no extras.

Wild Rubies can be played at some of the popular gambling sites like Genesis, JetBull, SlotsMillion, and Playamo.

Aristocrat Makes an Offer for Playtech