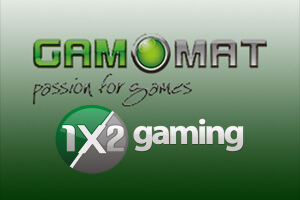 1X2 Network has announced that they added Gamomat slot games to their 3PI game aggregation platform. This deal will enrich the 1X2 Network platform with new exciting titles and make Gamomat products available to a wider audience.

Gamomat teams up with 1X2 Network as a new aggregation partner. That simply means that the German-based developer’s slot machines will be available to operators that have integrated 1X2 Network’s 3PI aggregator into their platforms.

According to the press release published on 1X2 Network official website, Gamomat is renowned for designing bold and vibrant games. One of the most attractive features included in some of their most popular titles is a ground-breaking first-person-shooter jackpot bonus round called Crazy Chicken Shooter. The slot machines using this feature include Fancy Fruit, Aura of Jupiter, Duck Shooter and Cutie Cat.

“The creativity and quality of Gamomat’s content make the developer the perfect fit for our aggregator, and we are delighted to be able to offer their slots to our operator partners,” Kevin Reid, Chief Commercial Officer at 1X2 Network said.

Commenting on the partnership, Dietmar Hermjohannes, founder and CEO at Gamomat, said that being added to 1X2 Network’s 3PI game aggregation platform was a big moment for them. It will put their games in front of more operators and players than ever before.

“Our titles offer something perceptibly different, from the design to the gameplay via our innovative first-person-shooter bonus round, and we believe they will be a huge hit with players in markets all over the world,” said Hermjohannes.

Gamomat is a developer of land-based and online slot machines. Founded in 2008 in Berlin, Germany, the company has created more than 260 titles equipped with exciting bonus features and different Jackpot systems. They say “Passion for Games” is the leitmotiv of the company which is in the blood of every team member. Thanks to long experience in creating land-based cabinets, Gamomat slot machines appeal to players looking for some real casino action where engaging gameplay and big wins come first.