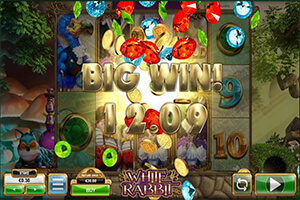 The adult-themed slot features the characters from Alice in Wonderland, but this time they look more like horror movie villains. What’s more, Big Time Gaming will use their Megaways mechanics to add new features – Extending Reels and Feature Drop.

Feature Drop was being developed over 18 months and it can be bought on entering the game. By collecting the coins landing on the reels, players can make the cost of the feature drop or wait for it to trigger as they play.

During Down the Rabbit Hole free spins, the Extending Reels feature is unlocked and the players are given a chance to get 60 retriggered free spins on the fully extended reels. The maximum number of positions on each reel is 12 and there are maximum 248,832 Megaways to win.

When creating the game, Big Time Gaming took into consideration those players who like streaming their play to people on YouTube and Twitch, so the audience can request the Feature Drop anytime they want.

The first person to play the game at the launch will be Swedish slot superstar Kim Hultman, more familiar to slot lovers on the Twitch platform as LetsGiveItASpin. The whole session will be streamed to his followers. The slot will be launched on 25 October at 7 pm GMT and for the wider market, it will be available as of 8 November. Visit LeoVegas now to play White Rabbit slot!

CEO of Big Time Gaming Nik Robinson stated that White Rabbit was their most sophisticated game to date as it took their Innovative Megaways mechanic to the next level, ramping up the entertainment factor for both low and high rolling players.

“Visually, it is a stunning game with intricate animations and rich graphics. This combines with the mechanics to offer one of the most engaging and immersive experiences players can find when spinning the reels,” said Robison and added that they are delighted to be launching it exclusively with LeoVegas, just like their previous release Danger High Voltage.

Robin Ramm, co-founder at Leo Vegas said that the casino, being the leader of the mobile future, was happy for having the chance of launching the game with someone who shared the same passion.

White Rabbit will be available for other Big Time Gaming partner operators as of 8 November.