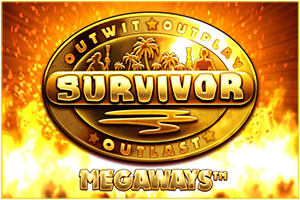 Another Megaways slot is scheduled to arrive from the Big Time Gaming creative kitchen in April. This particular game is based on the popular reality show Survivor and introduces a unique twist on the popular Megaways mechanics. The slot launches exclusively with Leo Vegas Casino on 15 April. Stay with us to learn more about the Survivor slot.

Bringing the popular TV franchise to the reels, Survivor takes you to an exotic destination where you have to outwit, outplay and outlast other competitors for the top prize. The setting transitions from an exotic beach with palms in the backdrop to a night scene lit by torches. The slot features a male and female character, the leaders of two tribes, as well as a collection of tribal masks mixed with playing card royals.

The Australian developer doubles the excitement by introducing a twist on the popular Megaways mechanic with the upcoming release. It comes in the form of the Dual Reaction Extra Reel that splits the main reels into two. What it practically does is adding an extra row to the grid where the reels 2, 3, 4, 5 and 6 feature 2-position high symbols.

The game benefits from reactions which remove winnings symbols from the reels allowing new ones to fall into their positions. Keep an eye on the red and blue urns as these will increase multipliers throughout the game. Whenever one of these hit the reels, they will be added to the respective leader of the tribe on the left-hand side of the reels. The game also offers Wild Multiplier doubling your payouts whenever included in a winning combo. What’s more, they multiply each other for higher wins!

The slot also offers a free spins feature where your winnings will be boosted by unlimited multipliers. Land 3 Scatters and you will receive 15 freebies with 5 more up for grabs for each additional Scatter. Within free games, Multipliers are not reset until the feature is over.

The game will be exclusively available from 15 to 29 April in LeoVegas.

Click here to visit LeoVegas and give Survivor a try as soon as it rolls out!