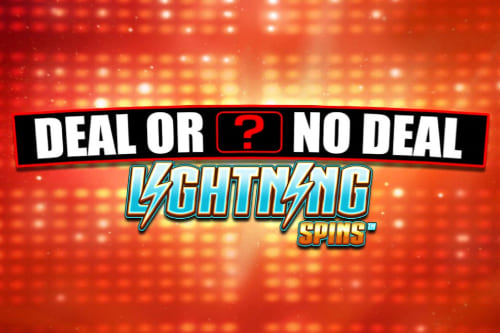 One of the leading UK based developers of online casino games, Blueprint Gaming, has just announced the launch of its newest video slot.

The company’s latest addition to its portfolio is based on the cult game show Deal or No Deal and will feature the brand-new bonus concept called Lightning Spins.

Once the game starts, players will be looking to take on the banker, while the new Lightning Spins option promises to give the gameplay an exciting new twist.

When it comes to prizes on offer, there are cash awards in the well-known red and blue boxes just waiting to be claimed. And if that’s not enough, there are four progressive jackpot on offer.

Blueprint’s Gaming new title will debut the new Lightning Gold Spins symbols. These icons remain fixed in their place during the bonus round, awarding payouts after every lightning spin. Although the individual awards may be small, they can build into hefty prizes during several bonus rounds.

Whenever Lightning Spins occur, the appearance of Scatters will reset free spins, and award a neat little cash payout in the process. Scatter symbols can also help reveal Mini, Major and Mega progressive jackpots while getting a full window of Lightning Spin will award the coveted main jackpot.

If you’re familiar with Blueprint Gaming’s lineup of games, then you know the most recent launch is the sixth game inspired by the popular game show to be added to the developer’s offering. We can only hope it will be as equally popular as the previous ones, whose list includes such games as Deal or No Deal Megaways and Deal or No Deal: Double Action.

Speaking about the new game, Jo Purvis from Blueprint Gaming said the developer had enjoyed huge success with previous Deal or No Deal games and pointed out they were looking forward to seeing the new release in action.

He pointed out that Deal or No Deal Lightning Spins would provide an entertaining new experience, along with lucrative cash prizes and jackpots.