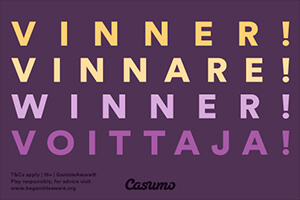 Casumo Casino has some great news for the end of the year. Its customer Lisa from Canada has hit a progressive jackpot worth $66,221 on the Holmes and the Stolen Stones slot while playing from the comfort of her home.

Stay tuned to learn more about the big win that was triggered with a $2 bet.

Another Big Win for Lisa

Lucky winner Lisa is a bus driver from Canada. According to the Casumo press release, Lisa gave her school bus a wash and went home where she plonked herself down on her favourite chair. She started playing one of her favourite games, Holmes and the Stolen Stones by Yggdrasil, and after she placed a $2 bet on it, a jackpot of $66,221 landed.

This is not the only big win Lisa hit while playing casino games. Last year she won $18,000 at another online casino while a few years ago she hit a $10,000 jackpot at a land-based casino.

However, the jackpot she hit at Casumo was the biggest ever.

“I have played on a few online casinos, but Casumo has by far been my favourite. I’ve never experienced any issues, withdrawals are prompt and the live chat is always ever so helpful,” said Lisa to Casumo representatives.

About Holmes and the Stolen Stones Slot

Holmes and the Stolen Stones is a progressive slot released by Yggdrasil in 2015. As you can guess from its title, the slot is based on the fictional private detective created by British author Sir Arthur Conan Doyle. It is a low to medium variance game boasting crisp graphics and an intriguing soundtrack that will keep you engaged during the gameplay.

Featuring 5 reels and 20 paylines, the slot invites you to join the search for the missing stones during which you can win one of five local progressive jackpots. To hit one of them, you have to collect five diamond stones of the same colour in the Jackpot Free Spin mode. A maximum possible payout you can win in a single spin stands at 80,000 coins.