Fight the Undead in Habanero’s The Dead Escape Slot 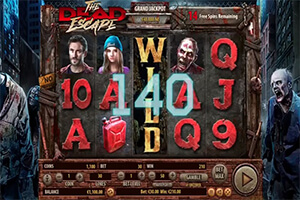 The Curacao-headquartered developer of slots and table games Habanero has launched its latest release titled The Dead Escape.

This 5-reel 3-row video slot with 30 paylines is set in a post-apocalyptic world infested with bloodthirsty zombies and centers the story around a father and daughter and their attempts to get away from the hordes of the undead.

The game’s scenery features the view of a destroyed city, with zombies roaming the streets, while the players will get the opportunity to enjoy top-notch graphics, neat animations and a matching soundtrack.

Packed With Action, Rich in Features

The slot offers players the chance to increase their winnings through Free Spins mode, triggered when three Scatters land on the reels, and the game’s bonus feature which awards 15 action free spins and sees the family duo take on the zombies in order to survive. Lines pay both from left to right and right to left, which will give you payouts more often.

Habanero Head of Corporate Communications Toni Karapetov described The Dead Escape as one of the company’s most thrilling releases ever. He added that players would have to spin their way to safety and survive in the harsh post-apocalyptic world, with danger lurking behind every corner.

Karapetov said the gory graphics and spine-tingling soundtrack would keep players on the edge, promising an intense gaming experience.

The Dead Escape joins the list of recently launched games from Habanero, which includes Panda Panda, Bird of Thunder and Fire Rooster.

Founded in 2012, the company has an extensive portfolio consisting of more than 80 slot games, 10 table games and 10 video poker games developed exclusively using HTML5, with new games added on a monthly basis.

Habanero has offices in South Africa, the Philippines, Bulgaria and Ukraine, providing hands-on technical and business support, coupled with high-quality products integrated into more than 45 operators and aggregators around the world, available in 21 European and Asian languages.

The company proudly states it provides pure entertainment through its graphically-rich games.