Find Immense Riches in Vault of Fortune Slot from Yggdrasil 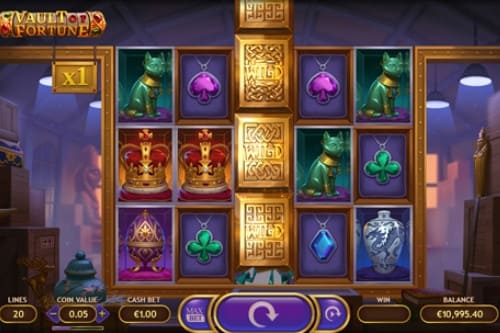 One of the leading suppliers of innovative online gaming content, Yggdrasil Gaming, has just announced the launch of the new release, which is set to become a smashing hit.

The renowned developer has opened the doors on the new adventure, titled Vault of Fortune and they seem to have high expectations from the attractive game.

The arrival of the latest slot is an important milestone for Yggdrasil Gaming, as this is the company’s first game to utilize the new GATI (Game Adaptation Tool & Interface) technology.

Vault of Fortune is played on a standard five-reel three-row grid, with a total of 20 active lines available. The game takes players to a warehouse filled with exotic artefacts and immense treasures, just waiting to be uncovered.

The slot boasts the cascading wins mechanic, where winning symbols get removed from the grid to make room for new ones to drop down onto the reels. This allows punters to form more than one winning combination within a single spin. Each new win on the same spin will add a multiplier to the game, further increasing its size with new cascades.

Landing three or more Scatter symbols activates the game’s Free Spins bonus round. This opens the Gold Chamber, where the multiplier will continue to increase as new wins are formed. A non-winning spin will reset the multiplier.

Land a Wild during a winning spin, and it will expand to become a six symbols long stack. This can lead to staggering wins!

He emphasized the slot’s high win potential during the Main Game, especially thanks to the expanding Wilds. Strandman further said he was looking forward to seeing the new release in action.