Get Ready for Anderthals Slot and Other Microgaming Releases in April 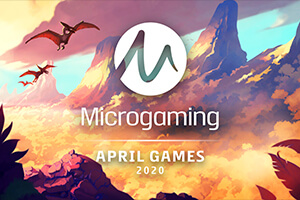 Microgaming has announced the launch of new games in April. Coming from Microgaming’s network of independent studios and its content partners, new slot releases promise loads of excitement. Stay with us to learn more about them.

From Cavemen to Jewel Burglar

The first title coming in April is Anderthals, a 5-reel, 40-payline slot created by Just For The Win exclusively for Microgaming-powered online casinos. The story behind it revolves around a cave couple, Andy and Annie Anderthal, who will take you on an exciting journey. While enjoying crisp graphics accompanied by a lively soundtrack, you will benefit from randomised feature spots. They are placed above the reels and can award expanding Wilds, multipliers, respins, free spins and more. A maximum win potential sits at 2,219x the bet.

Just a week later, on 14 April, you can join four superheroes in a quest to protect their city. Titled Diamond Force, the 5-reel slot offering 1,024 ways to win is brought to you by Crazy Tooth Studio. It provides the Team-Up Feature and Team-Up Bonus Spins that can help you obtain prized fortunes the superheroes are fighting for.

Developed by All41 Studios, Arena of Gold sees gladiators fighting for legendary treasures. Sporting the Roman Empire theme, the slot due to launch on 21 April takes players on an adventure at 5 reels and 25 paylines. The game benefit from free spins with merged reels and the Golden Re-Spins feature.

On 28 April, The Vault slot will go live. It is a result of the new partnership between Snowborn Games and Microgaming and takes you to an elegant Parisian art gallery. Meet devious burglar Jewel and help her carry out a sophisticated heist at 5 reels and 20 paylines. The slot comes equipped by a range of bonus features such as respins, expanding Wilds and free spins. The design of the game is impeccable with 3D graphics combined with high-quality audio.

Besides exclusive content, Microgaming will also add several slots developed by its leading content partners. They include:

In a press release, Microgaming representatives say that the new releases will strengthen the company’s content portfolio.

“Rich in rewarding features, stunning visuals, and diverse characters and styles, there is plenty of choices available for our customers this month,” said James Buchanan, Director of Global Operations at Microgaming.

Click here to visit Microgaming-powered casinos and give new games a try!