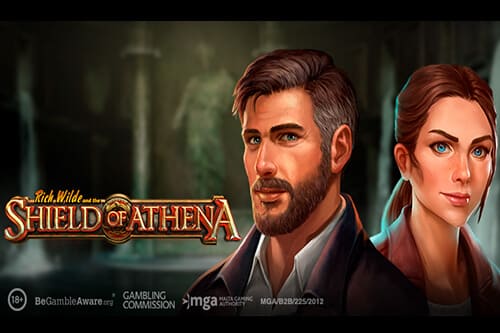 The leading developer of online casino games Play’n GO has announced the launch of a brand-new video slot that should become a valuable addition to the company’s portfolio of exciting and high-quality releases.

Rich Wilde is once again returning to the reels in the latest instalment in this successful series. Titled Rich Wilde and the Shield of Athena, the game joins previous adventures featuring the fearless character, whose list includes Pearls of India, Book of Dead, and Tome of Madness.

Embark on an Epic Quest

Rich Wilde and the Shield of Athena takes place on a standard reel set, consisting of 5 reels and 3 rows, and will see the famous explorer travel to the legendary city of Atlantis, where he’ll give his best to uncover the shield of the goddess Athena.

Swedish developer has once again found its inspiration in ancient mythology, and as always, has managed to take it to a whole new level. The recently-launched slot is centred on the Aegis, a legendary shield with the head of Medusa on it, whose immense power could turn anyone to stone.

Once the reels start spinning, players will benefit from a number of exciting features this exciting slot offers. One of those potentially lucrative features is the Wilde Re-Spins. When activated, all winning lines will be set in stone, with the remaining ones respinning to enable punters to grab additional wins.

Rich Wilde promises a rollercoaster of fun, with stunning visuals and immersive gameplay. Speaking about Wilde’s latest adventure, Johan Törnqvist, Chief Executive Officer at Play’n GO said their players loved the famous explorer and pointed out they were ready for another exciting release.

Törnqvist went on to say the new release was of the highest quality and added he was sure it would become very popular among players of all types. With its beautiful graphics, and exciting and well-designed in-game features, we’re certain Shield of Athena would live up to its name.

If you wish to give this game a go, simply visit any online casino powered by Play’n GO and find Rich Wilde and the Shield of Athena. Your adventure can start whenever you want!