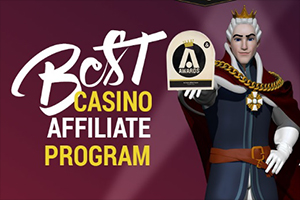 The 12th annual iGB Affiliate Awards took place on 8 February. The event welcomed over 1,500 people into The Brewery, a premium conference venue in London, to honour the online gaming industry.

One of the winners of 21 different awards was King Billy Casino, the gaming establishment awarded for the best affiliate program.

Another Award for His Majesty

King Billy was launched in 2017 and within mere 20 months they have established themselves as one of the leading brands in the highly competitive market. So far, the casino has collected several industry awards. Earlier this year, in January, it scooped two awards at the AskGamblers Annual Awards – The Best Casino 3rd place and the Player’s Choice Casino 2nd place. In 2018, the casino was awarded the Best New Casino at the event hosted by the AskGamblers gaming portal.

The award King Billy Casino received for the best affiliate programme at iGB Affiliate Awards shows all the dedication and efforts its founders and the whole management team put in the partnership with numerous gaming portals.

iGB Affiliate Awards is one of the biggest events in the world where gaming portals are in the spotlight. It takes place annually, on the last night of the annual London Affiliate Conference. Focused on transparency, iGB Awards are among the most respected in the industry. Judges voted the best affiliate websites and individuals in 21 categories this year. The categories included the Best Poker Website, Best Casino Website, Best Casino Affiliate Manager, Best Affiliate Newcomer and Best Innovation, to name a few.

“I’ve judged the awards for a few years now, but the calibre of the 2019 entrants was outstanding! It really, truly came down to the wire when having to decide the winner,” said Stuart Dacre, one of the judges of this year’s awards.

Click here to visit King Billy Casino and see for yourself what the fuss is all about!