Microgaming Gets Ready for a Shower of New Releases in April 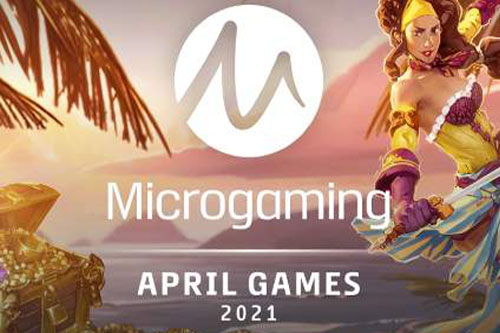 The leading developer of online casino content, Microgaming, is set to further diversify its extensive offering of games this month with a plethora of new and exciting releases.

Players can look forward to lots of fun, from ancient mythologies and horror to pirate adventure and Arthurian legend, while features such as Firepots, expanding reels, and Super Spins will only add to the excitement.

Prepare for an Exciting Month

Together with Buck Stakes, Microgaming will launch a pirate-themed slot titled 8 Golden Skulls of Holly Roger Megaways. The game will offer the Firepot jackpot feature, where players will be able to scoop payouts of up to 1,900 times the bet. Add Rolling Reels, a Free Spins bonus round, and a multiplier bonus wheel, and you get an adventure of epic proportions. Thanks to the popular Megaways mechanic, there are between 64 and 117,649 ways to win on every spin.

Ancient Egypt awaits in Queen of Alexandria WowPot. Cleopatra possesses immense riches, and if you’re lucky enough, you may end up taking a portion of it home. The WowPot progressive jackpot seeds at €2 million and quickly reaches seven-figure sums. Featurewise, you can benefit from expanding Wilds, respins, and the WowPot game. The latter has four different progressive prizes on offer.

Gold Collector takes players deep underground to mine for gold. It comes with the HyperHold feature and a total of five jackpots. The slot’s looks may be cartoonish, but its prizes are dead serious.

Blazing Diamonds is a classic slot, offering players the chance to claim multiple prizes through the Blazing Wheel feature. Then it’s off to Egypt again, with Snowborn Games’ Egyptian Tombs. Ancient deities line up on the reels to produce stunning prizes. The slot’s main attraction is the Super Spins feature.

Just For The Win presents Book of King Arthur, where players will join the legendary king on a quest to uncover the treasures of Avalon. If that’s not exciting enough, you can go on a vampire hunt with Anna Van Helsing Monster Huntress. The eerie-looking game is packed with rewarding features, such as Wolf Attack, Wolf Howl, and Dracula’s Banishment.

Fu88 is a cheerful Chinese-themed release that comes with a nice selection of bonus games, including a jackpot. Fans of poker will surely enjoy Hold’Em Poker 2, a multiplayer game with a progressive jackpot.

Live a life of a Roman gladiator on the new Inferno Gladiator slot. Free Spins, sticky Wilds, and multipliers will set the Colosseum on fire! Slots O’Luck is an Irish-themed release boasting the Gamble feature. The fun doesn’t end there as Iron Dog Studio prepares the thrilling Robbin’ Robi slot.

1x2gaming will add two new releases to the lineup, Triple Bar 98 and Triple Bar 96. At the same time, Survivor delivers a fresh take on the popular Megaways mechanic.