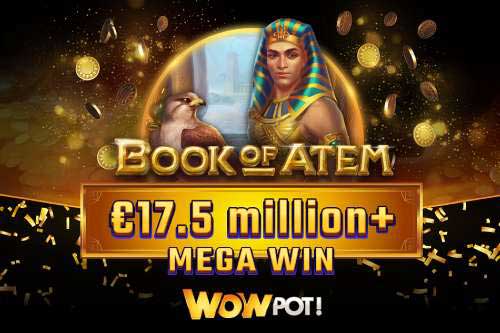 A stunning eight-figure jackpot was paid out last week after a lucky player from the UK hit the progressive prize. A bet of just £0.80 stake was enough to deliver a staggering payout worth €17,529,047.11.

What an Amazing Feat!

The winner, who didn’t wish to reveal his identity, is the 93rd millionaire created by the gaming giant’s progressive slots. Microgaming’s progressive jackpot network has so far awarded over €1.3 billion in winnings.

As usual, the lucky slot lover will receive his prize as a lump sum.

Developed by All41Studios, Book of Atem WowPot was released in September last year. Since its inception, the exciting Egypt-themed slot has paid out over €23 million in cash rewards. A month ago, the game awarded a Major jackpot worth €998,876.35.

WowPot became part of Microgaming’s progressive network in February last year, while Wheels of Wishes was the first title to offer it to players. It’s an industry-leading jackpot, seeding at €2 million.

Apart from these two games, the list of WowPot titles includes Sherlock and Moriarty WowPot, developed by Just For The Win, Queen of Alexandria WowPot from Neon Valley Studios, and many others.

After it was claimed last week, the Mega jackpot will return to its starting value of €2 million. That’s a lot of money, but it still pales in comparison with the prize of €18 million currently offered by Mega Moolah.