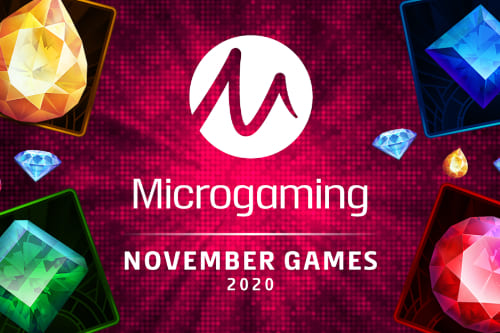 November is a cold time of the year, but the leading provider of video slot games, Microgaming has heated up the atmosphere with its latest additions to the company’s portfolio.

Players can look forward to an exciting month, filled with lots of new games that are sure to become valuable additions to the online gambling software developer’s current offer.

Microgaming kicked off the month in style, launching the new slot titled deadmau5, developed with the famous Canadian DJ of the same name. Exclusively produced by Eurostar Studios, the fresh release comes with a cascading five-reel layout and offers punters 243 different ways to win.

In addition to well-executed visuals, the game features lots of energetic tracks from the famous artist. Featurewise, the Rolling Reels and Drop the Wilds mechanics guarantee an unforgettable experience.

The company has prepared two new releases that draw their inspiration from Ancient Rome. Developed by Just For The Win, Neptune’s Riches is ready to hit the market on November 17, taking players to ocean depths and boasting high volatility.

When it comes to features offered by this game, its list includes Rising Wild Respins, as well as four Rising Wilds, which can appear with multipliers of up to 10x. There’s also the Walking Wild Free Spins, activated whenever three Scatters find their place on the reels. Once the bonus round is triggered, an endless stack of Wild symbols will begin moving across the grid, increasing multipliers along the way.

An Entire Month Filled with Excitement

Augustus is another Ancient Rome-themed game, created for Microgaming by Neon Valley Studios. This highly volatile release is scheduled to go live on November 24.

The slot takes place during the reign of the emperor Augustus and brings such thrilling features and Full Wild Reels and stacked symbols. Punters will have the chance to activate the Volatility Pick Bonus Feature, with up to 25 free spins and three random Wild Reels waiting to help them claim prizes.

Tiki Reward will be launched on November 10, and as its name suggests, the game developed by All41Studios is based on Polynesian culture. With Scatters acting as multipliers, players can claim one a Tiki Jackpot, with the largest one awarding a prize worth 1,000 times the stake.

Microgaming will also launch two new table games in November. Real Baccarat with Sarati will go live on November 19, while Multifire Roulette will join the company’s offering a week later.