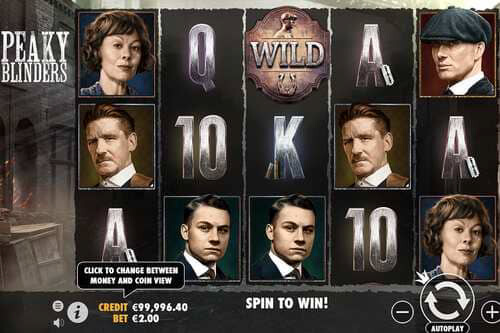 Pragmatic Play has recently expanded its offering of video slots by launching a new game inspired by the UK hit series Peaky Blinders.

Premiered in 2013, the series set in Birmingham in the early 1920s has become a smashing hit across the world. Drawing its inspiration from a story of a real gang, the show centres on the Shelby family, the leader of a crime syndicate.

Peaky Blinders is the first branded slot to be launched by Pragmatic Play, following the deal with Endemol Shine Gaming, signed in January this year.

Thanks to this deal, Pragmatic Play was able to bring Tommy and Arthur Shelby to the game, but also other popular characters, such as Polly and Michael Gray.

Peaky Blinders is considered to be a medium-to-high variance slot, with the game’s average Return to Player set at 96.50%. It takes place on a standard five-by-three grid, with a total of 20 fixed paylines on offer.

When it comes to wagering, players can place any stake ranging from a mere $0.20 up to $100 per spin.

Once the reels start spinning, you’ll encounter various symbols, from the low-value playing cards to higher-paying icons that feature the show’s protagonists.

The Wild symbol is also one of the most valuable symbols, awarding the same payout as the Tommy Shelby icon. It’s also able to substitute for all other regular symbols, helping punters form additional winning combinations.

The Shelby Betting Shop feature is activated when the symbol of the same name lands of the rightmost reel, while two bonus icons appear on reels 1 and 3 at the same time. In addition to receiving a cash prize, punters will have the chance to enjoy a potentially very rewarding Free Spins round.

When two bonus symbols land on reels 1 and 3, the By Order of the Peaky Blinders icon can unlock another special feature, although it will have to be present on reel 5 to do so. This is also a Free Spins round, but with character and Wild symbols remaining locked until the feature comes to an end.

The new Peaky Blinders slot has already hit the market and can be played for free or for real money at any online casino powered by Pragmatic Play.