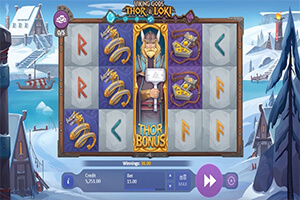 Malta-based software developer Playson has launched a new video slot called Viking Gods: Thor & Loki which takes you on an epic adventure to the land of Vikings.

The omni-channel slot machine inspired by Norse mythology features high-definition visuals and a dramatic soundtrack which will provide you with an enjoyable gaming experience. Played at 5 reels and 15 paylines, the game features two Norse gods, Thor and Loki, who trigger two free spins features with a great winning potential.

If you are not familiar with Norse mythology, you should know that Thor is the hammer-wielding god associated with thunder and strength. On the other hand, his half-brother Loki, also known as the Trickster, is the mischievous and unpredictable god who challenges the structure and order. Each of them is responsible for triggering free games which, depending on the featured god, offer rewarding extras which will boost players’ chances of winning.

Should you land a full stack of Thor Bonus symbols on the central reel, you will unlock free games during which you should help Thor battle the World Serpent. You have to collect top paying blue crystal symbols to progress through the feature and make the Serpent grow to Colossal Wild. Up to 9 positions on the reels can be covered with Serpent Wilds which can lead to huge payouts. Each new level on the progress bar completed awards additional free spins.

When a stack of Loki Bonus symbols covers the middle reel entirely, Loki free spins are activated with the Fenrir Sticky Wild symbols landing on the reels. To get more Sticky Wilds, you also have to collect pink crystals and move up the progress bar, just like within Thor free games. These Wilds will stay frozen in their place until Sticky Wild is included in a winning combination and the lock is broken. The higher the level, the more rewarding Wilds with up to 3 locks are added to the reels. You can also win extra free spins with each new level completed.

During the game, you will have an opportunity to win bonus free spins thanks to the Achievements feature. You can track your progress by clicking the menu in the upper left corner of the reels. Throughout the game you will benefit from the Viking God feature which adds Wilds to the reels when the god Bonus symbols appear partially on the reels.

Travel to the land of Vikings and make Norse myths live with the brand new slot from Playson and mighty gods will use their powers to help you land large payouts.

Visit SlotsMillion to give Viking Gods: Thor and Loki a try.