Playson Teams up with 888Casino 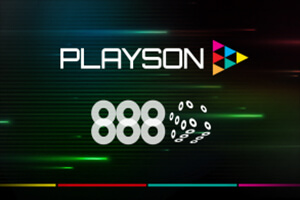 Playson, one of the leading software developers, has announced the partnership with 888Casino. The deal sees a full suite of Playson slots available at one of the most popular online gambling brands in the world. Stay tuned to learn more about this partnership.

According to the press release published on the Malta-based developer’s website, Playson has teamed up with 888Casino and will provide its suite of games via the Pariplay platform. Initially, Playson slots will be available to 888Casino customers in Sweden, Spain, Denmark, Italy and Romania. The games will launch in these countries during Q1 of 2020. Later this year, their titles will be also available in Gibraltar territories and the UK.

The deal has further strengthened Playson’s position as a leading supplier in the online gaming industry, with 888Casino being another tier-one operator they have partnered with. Senior Account Manager at Playson Christos Zoulianitis said that they had been at the forefront of the industry for more than 10 years.

“Our portfolio of games will be a great addition to its offering, and we are excited to be further extending our reach across Europe,” said Zoulianitis adding that they were thrilled to join forces with such an established operator.

The Deal Includes the Latest Titles

888Casino is granted access to Playson’s full range of slot machines, including the latest release Fruit Xtreme, which is the second instalment from the Funky Fruits slot series. Senior Vice President of 888casino Guy Cohen said that they were focused on expanding their offering to customers. To ensure that, 888 develops in-house games and adds third-party content to its platform.

“Playson has a fantastic team which have developed a unique portfolio of games, including classics such as Solar Queen and Red Chilli Wins,” said Cohen adding that Playson titles would enhance the player experience.

Click here to visit 888 and give Playson slots a try!