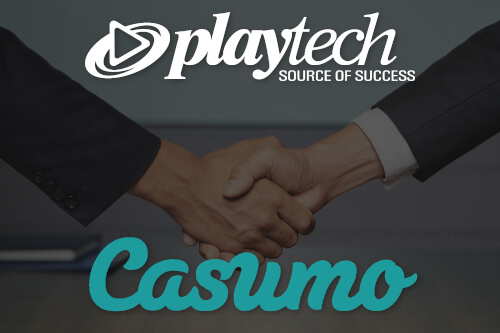 Gambling technology company Playtech has recently announced the signing of an important new partnership agreement that is sure to help the provider expand its presence and reach a broader player audience.

Under the provisions of the new deal with Casumo, Playtech will launch its titles across brands owned and operated by the renowned gambling operator.

Punters in various regulated markets can look forward to enjoying a wide range of casino and live casino games developed by Playtech. The first one to get the new range of content is Casumo’s flagship brand of the same name.

Playtech will then slowly launch its content across other brands, including Dunder, CasinoStreet and Kazoom Casino. According to available information, the integration should be completed in early next year.

Casumo is one of the latest operators to have teamed up with Playtech recently. The developer of online casino games has been very busy over the last couple of months, extending its partnership with BoyleSports, signing a new deal with Rank Group in the UK, and further bolstering its footprint in Greece through an agreement with Novibet.

Getting Ready for the First Phase

Earlier this week, Playtech announced the first phase of rollout would soon begin. Once completed, Casumo players in the UK will be able to enjoy Playtech’s portfolio of high-quality casino content.

The list of games that will be available to Casumo punters includes such popular branded titles as Justice League and the Sporting Legends Suite. They will also have the chance to claim one of the developer’s lucrative progressive jackpots.

Apart from the company’s slot games, Casumo will add Playtech’s live dealer and table games to its offering. We’re sure that titles like Live Quantum Roulette, Blackjack, and Spin a Win will quickly become very popular among the casino’s customers.

Speaking about the new partnership deal, Shelly Suter-Hedad, Chief Executive Officer at Casumo, said she was delighted to join forces with Playtech and deliver the developer’s content across a portfolio of brands owned by her company.

Suter-Hadad added they were looking forward to strengthening the relationship with Playtech in the coming year and pointed out she couldn’t wait to see the supplier’s content in action.

In addition to the UK, Playtech’s games will be available to Casumo brands in Denmark, Sweden and Spain.

Playtech Chief Operating Officer, Shimon Akad, said they were delighted to have partnered with Casumo, and added he was confident the company’s content would become very popular with the operator’s customers.