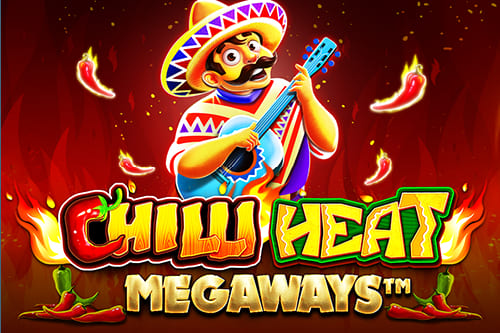 Pragmatic Play has added another attractive game to its extensive portfolio. Players can join the dancing floor and enjoy the festivities in the newest game, Chilli Heat Megaways™. The game follows the theme from the original title, Chilli Heat, with enhanced temperature taking place on the Mexican streets.

This is yet another release from the provider that continues to enrich its catalog with immersive content. Chilli Heat Megaways™ will attract both new and existing customers of the brand.

As soon as you join the game, you will see different features and symbols. The main element of the game is Wild that replaces all other symbols to create a winning combination. At the same time, Wild lands only on reels 2, 3, 4, and 5. Wins are delivered when hitting adjacent symbols from left to right. The game includes 200,704 ways to win, which promises to bring great excitement to different sorts of players.

As for additional features, you will see anything from Tequila, Mariachis, and the Wild Hot Sauce elements providing an authentic Mexican atmosphere. A Tumble mechanic also eliminates winning combos from the reels and substitutes them with new symbols. It results in additional wins and tumbles.

The main feature of the game appears in the form of Re-Spins, where a multiplier rises with every tumbling win. You can activate the Re-Spin feature by hitting six or additional Money symbols, which have modifiers. It includes Locks, which enable players to release more reels and arrows. As a result, players can take advantage of the expanded reels with seven symbols. At the end of the Re-spin round, the value linked to the Money symbols will be added to the total payout.

Chilli Heat Megaways™ also includes an Ante Bet, allowing players to double their chances of activating the Re-Spins mode. However, the feature costs 25% more than a typical bet. As for the music of the game, it sounds familiar but also includes some specific moments. The game itself has a larger grid, enhanced graphics, and excellent background imagery.

Chief Business Development Officer at Pragmatic Play, Yossi Barzely, says that the original iteration of the title went down an absolute treat with its players, and it felt like a suitable time to relaunch it. The company is thrilled with the game’s festive theme, enhanced graphics, and cutting-edge mechanics that are entirely new to Pragmatic Play’s portfolio. They also hope that the game will be well-received by customers.