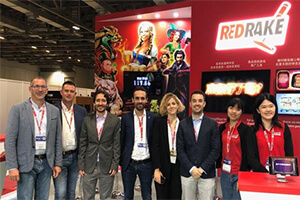 Red Rake Gaming showcased a full range of casino games from their production at G2E Asia. This was a great opportunity for the Spain-based software developer to introduce itself to the Asian market. Held in Macao annually, G2E Asia is the biggest international event in the Asian gaming industry.

From Slots to Table Games and Video Bingo

This was the first time Red Rake Gaming took part in G2E as an exhibitor. Being already present in the regulated markets across the world, Red Rake Gaming seized the opportunity to attend G2E Asia. They showcased five different types of casino games included slots, Video Bingo, Video Poker, Blackjack and Roulette. According to the press release the company published, they presented their recent launches and made new contacts that could help them in the market expansion.

“It is great to see the volume of interest and demand the Red Rake Gaming portfolio is receiving, which is a testament to the hard work and innovative thinking from our games development team. We look forward to continuing our growth in the region and have a busy summer lined up onboarding our new partners,” said Nick Barr, Managing Director of Red Rake Gaming Malta.

Having built up a significant reputation within less than three years, Red Rake Gaming has been present in different regulated markets. They include Spain, Portugal, Italy, Sweden and Romania. The company holds the licenses issued by the UK Gambling Commission and Malta Gaming Authority, which prove that their games comply with the industry standards.

Global Gaming Expo Asia (G2E Asia) is the biggest event dedicated to gaming entertainment in Asia. Debuting in June 2007, G2E was held for the 13th time this year. The event gathered more than 18,000 visitors including the leading gaming operators in the Asian market. For them, this is a perfect place to learn about new products, cutting-edge solutions and future trends in the industry.

G2E Asia is organised by the American Gaming Association (AGA) and Reed Exhibitions as part of The Global Gaming Expo (G2E) portfolio of events. While G2E is held annually in Las Vegas, Nevada USA, the Asian edition of the event is held in Macao, known as Vegas of China.

Click here to visit Jetbull and give Red Rake games a try!