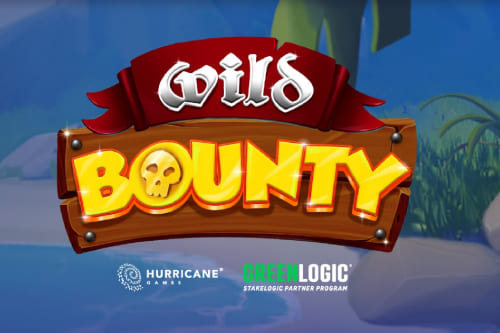 Stakelogic has joined forces with Hurricane Games to deliver a pirate adventure, Wild Bounty. The new game consists of a 5×3-reel grid and 20 paylines along with staggering features.

If you enter the base game, you can see the Canon Scatter symbol splashing onto the reels. It adds one, two or three bombs to the selection sitting above the playing reels. When you collect 3 canon bombs over any reel, you will trigger Wild Stacks. It will turn all symbols on the same reel in Wild for the upcoming three spins. If the player has another bomb selection during Wild Stacks, the counter returns to three. However, players are also able to fill several bomb collections in one spin.

Maximum Potential of the Game

Those who continue the pirate adventure can take advantage of the Bonus Wheel feature when three Scatters appear in the base game. The wheel spins and halts on a place where it awards Wild Bounty Links, Free Spins, or a Minor, Grand or Major award.

When entering Free Spins mode, the reels modify to a 5×6 grid with 50 paylines. Bomb selection and Wild Stacks will be taken from the base game. It means that additional bombs can be gathered and trigger more Wild Stacks.

There is also a Wild Bounty Links bonus, which change reels to a 3×5 grid with 15 symbol sports. Additionally, 3 coin icons are provided and sit over the reels before the reels begin with spinning.

The game also presents Treasure symbols that appear on all 15 spots.  If they don’t appear, one of the coins will be taken away and the counter with left reels will go down by one. If treasure emerges, the symbol connects to the reels and the coin element and spins counter transform to three. The feature will end if there are no additional coin icons in view. By filling in all 15 symbols, a grand award is released.

Wild Bounty also introduces Wild Bounty Pirate which is placed at the side of the reels and flips barrels onto the reels. They respond by delivering one of three bonuses such as Random Wilds, Random Bombs and Pick a Barrel. As part of the feature, players select a barrel to get one of three bonuses and access to Wild Bounty Link. It delivers 5/10/15/20 Free Spins or an Additional Prize of x3/x5/x8/x10/x15/x20/x50 the bet.

Reactions to the New Game

Speaking on the new title, Head of Greenlogic® at Stakelogic, Salvatore Campione, said that Wild Bounty was the brand’s take on the popular pirate theme. He also added that they had taken the thrills and excitement to the next level with this title.

According to his words, the slot is full of explosive bonus features such as Free Spins, Wild Stack, a Bonus Wheel and of innovative Super Stake™ system. This, blended with bold animations, will help players set sail searching for huge wins and exciting slot adventures.