Join Live Casino Tournaments at LeoVegas to Win a Share of €30,000 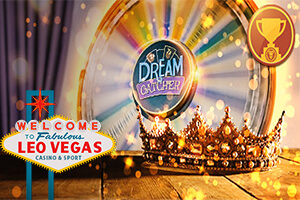 LeoVegas hosts the King of the Wheel promotion with tournaments held on Live Casino tables. By joining them, you can win a share of €30,000 in cash.

The player who collects the most points over the next three weeks will be crowned The King of the Wheel and win extra €5,000.

Each week, a tournament will be held at a different live dealer table and you have to collect points and climb up the royal leaderboard every Monday to Thursday to rank among the top 50 players who will get their share of the weekly €10.000 prize pool.

How to Win Regal Prizes

Week 1 starts on 12 March and the qualifying period lasts until Thursday, 15 March. Competitors will have to play Live Dream Catcher during this period and those who are among the top 50 players will get cash prizes credited to their accounts on Friday, 16 March.

To calculate points you will earn while playing at the featured live tables, you have to use maths. If you place a €10 bet on a straight-up number and that number wins, you will get 40 points according to the formula win/bet + 0.5 points for every €1 bet placed on the winning number. Outside bets will not earn you any points in this tournament.

The weekly prizes are split as follows:

Finally, the most successful competitor who earns the largest amount of points will be crowned the King of the Wheel and take €5,000 home.

Both real and bonus money can be used in the King of the Wheel promotion and bets have to cover less than 70% of the outcome on the wheel. If you cover over 70% of the results with bets, your wagering will not earn you points you need to climb up the leaderboard. Bets can be placed on a maximum of 26 numbers in a single game round to qualify. Otherwise, no points will be allocated.

Players can join the tournament from their desktop or mobile devices and check out the weekly King of the Wheel leaderboard updated daily by 16:00 to see if they are among the best 50 players.

All prizes are credited in cash with no wagering requirements attached.