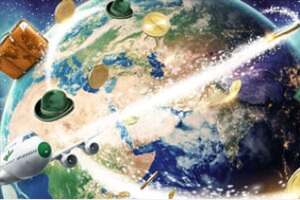 Have you ever been wondering what it feels like to float like an astronaut in space? If your answer is “yes”, you have come to the right place. Stay with us to learn how to join the €150,000 Adventure Giveaway promotion at Mr Green Casino for a chance to win a trip to New Zealand, cash prizes or a Zero Gravity experience worth €30,000.

Between 8 October and 10 December, Mr Green hosts a promotion called €150,000 Adventure Giveaway. During it, you can take part in three exciting tournaments and win one of the prizes including VIP travel packages for two, thousands in cash and an intergalactic Zero Gravity experience.

The first tournament started on 8 October and ends on 15 October. To participate in it, Mr Green customers should play qualifying slot games at €0.50 per spin or more. If you make it to the leaderboard with the top 1,000 players who score the Highest Win from a Single Spin (regardless of your bet value), you will win one of the prizes. Cash prizes range between €10 and €5,000 and you can keep all that you win as there are no wagering requirements attached to them. The top prize is a VIP trip to New Zealand for two worth €10,000.

As for a trip to New Zealand, it includes a cruise on the lake Ta Anau with a visit to the underground glow worm caves. The winner will also enjoy a private helicopter tour with a gourmet picnic at the Middle Earth waterfalls, where The Hobbit movie was filmed. On top of it, they can enjoy other adventures such as a 9,000ft skydive, jet boating in Shotover River Canyon and white-water rafting.

Other two tournaments start on 5 November and 3 December, so make sure to plan to join them for a chance to win other prizes including the grand prize.

About the Grand Prize

The last tournament ends on 10 December. When all three tournaments are concluded, one lucky player will win the grand prize – a breath-taking Zero Gravity experience worth €30,000! To be a potential winner of this one of a kind experience, you need to be among the top 1,000 players on the leaderboard who have scored the Highest Win from a Single Spin from at least one of the tournaments. The more tournaments you take part in, the higher the chances of winning the grand prize as your scores from them are added together.

The winner of the grand prize is granted a Zero Gravity flight for two where they can experience true weightlessness and float like an astronaut in space. A stunning helicopter ride for two over the city is also included as well as an opportunity to drive the supercar of their dreams around a professional racetrack.

Click here to visit Mr Green for a chance to win a cash prize, a VIP trip to New Zealand or a Zero Gravity experience for two!