Big Time Gaming may not be the biggest name in the gaming business, but the company has definitely left a lasting mark in the industry thanks to their revolutionary MegaWays payline structure and a unique reel system with the capacity of hosting additional icons. The innovative approach is the extension of BTG team’s vast experience, ambition, and passion for gaming; it’s obvious that their focus is on providing high-quality games that challenge the conventional slot design, which opens a lot of opportunities for market expansion.

Their MegaWays structure is already threatening to banish the conventional reel system into oblivion and the design has recently been adopted by Blueprint Gaming. At the moment, BTG only has a modest gaming catalog, which makes our job of filtering the highest-payout Big Time Gaming slots fairly easy.

Let us start with one of the very best Big Time Gaming slots (subjectively speaking) – White Rabbit. Inspired by the Lewis Carroll’s Alice’s Adventures in Wonderland, White Rabbit is the 5/7-reel slot with the amazing 97.72% RTP and a massive number of paylines that change on every spin. The base game offers up to 16,807 ways to win, while the bonus features increase the number of betways to 248,832.

With so many ways to hit a winning line, you would think that the developer will cheap out on the bonus features, but fortunately, that’s not the case. Free Spins, Extending Reels with extra icons, and the Caterpillar that adds up to 4 Bonus icons are only some of the perks that this game has to offer, not to mention Cupcake icon (replaced by two new symbols), Queen’s Reel with more Wilds and Red Queens, and the Feature Drop that enables you to purchase the feature.

Starquest is pretty close to hitting 97.00% mark – the long-term play is estimated at producing 96.90% RTP, however, some caution is advised as this is a high-volatility game which is something that tends to put people off. The slot has 117, 649 win-ways and bears a certain resemblance to another popular outer space slot – that’s right, you guessed it, Starburst!

The Wild icon carries the progressive multiplying value of x1 to x5 and the Full Reel Wilds can even multiply each other. This symbol can also trigger the Re-spin feature which can potentially end in even higher multipliers and another re-spin awarded should a new Full Reel Wild icon appears.

Queen of Riches is another high volatility slot that has the same RTP percentage as Starquest – 96.90%. The two slots were launched in the same year (2016) which explains some of the similar characteristics, such as Full Reel Wilds and the number of paylines.

The Queen of Riches does, however, introduce a new bonus feature called Reel Clone, which can be randomly triggered after every spin to generate 2 to 6 additional reels. Even Full Reel Wilds can be cloned, which means more multipliers! 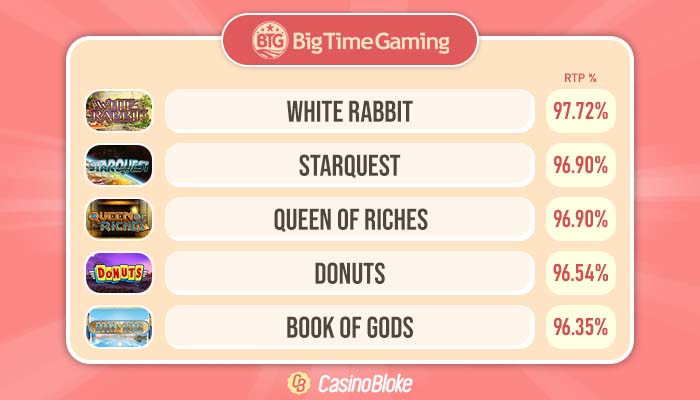 Skip this one if you are on a diet, otherwise, it will trigger a major sugar craving. Donuts is one of the recent BGT Gaming releases (launched in July 2018), featuring 96.54% RTP and medium volatility. The choice of theme is quite peculiar, and one will really have a tough time finding another game with donuts rolling down the reels. Bonus features are just as tasty as the high-value icons.

The Golden Donut Scatter which unlocks up to 20 Free Spins is a special treat, but Donut Boxes may even be a sweeter surprise since they can reveal more than just glazed delights – x2, x3, and x4 multipliers. Before the Free Spins are set into motion, a bonus game will be initiated, during which the player can win up to x50 multiplier which will be applied in the Free Spins winnings.

This release has the lowest number of potential paylines from all other slots on this list – only 243 win-ways, on a standard 5-reel structure with 3 rows. Note, however, that this is one of the rare games where low-value icons will have a purpose higher than just producing insignificant payouts. Any random spin can transform A, K, Q, J, 10 or 9 symbols into a Cloning icon which will then fill all the positions on the landing reels with the matching symbols that pay both ways.

The Scatter icons can unlock up to 20 Free Spins and this time the role of the Cloning icon will be played by one of the Gods, revealed by the Book of Gods icon at the beginning of the feature. Free Spins are re-triggerable and if you do not care to wait for a feature to be activated you can buy the feature for a full price displayed on the screen or wait for the Feature Drop icon to land and give you a discount.