After some time, we are back with our lists of slot machines with the highest return to player (RTP). This time, we have studied iSoftBet products, and we bring you the top 5 titles that have the highest return to player rate. As you probably know, choosing a high RTP slot game is the least you can do to improve your game. Yet, the releases we have included in this list won’t disappoint you in other respected either. They come packed with exciting bonus features that will keep you glued to the screen of your desktop or mobile device.

With their video slot themed on martial arts, iSoftBet takes you to the Far East where you will join a kung fu master on his quest. Shaolin Spin is a 5-reel slot offering no less than 243 ways to win. The reels are set within a Shaolin Temple and are home to an array of theme-related symbols including a dragon, white crane, nunchucks, Shaolin temple and the old master. These make up the higher ends of the paytable while playing card royals pay prizes of lower value.

Wild is depicted as the black and white yin and yang symbol, and it appears on reels 3, 4 and 5 only to help you complete more winning combos. Whenever Wild hits the reels, it expands to add up to 4 additional Wilds forming a cross on the reels. The kung fu warrior assumes the role of Scatter and 3 or more of these award up to 20 free spins and up to 10x your bet on top. All wins obtained during free games are trebled.

Again, we have a slot using the same structure as the previous entry – 5 reels and 243 ways to win. Wisps takes you on an intergalactic adventure to outer space where you collect swirling wisps to win prizes of higher value and playing card icons that pay low-value prizes. The game provides you with a mysterious feel with a soothing music score playing in the background.

The burning yellow wisp represents Wild that will complete your wins. Another special symbol is the so-called Transformer depicted as the wormhole. When it hits the central reel in the Left to Right transformer mode, the Transformer turns all low-value symbols into the symbol of a kind. Look out for Butterfly Wisp Scatter as 3 or more of these pay up to 15x your total stake and award 15 free spins. Before free games begin, you will be offered to pick one of 2 extras – Bouncing Wilds or Spiral Wilds. The former turns up to 5 random icons into Wilds while the latter make up to 3 reels go fully Wild.

Played at 5 reels and 30 paylines, Platoon is based on the 1986 movie of the same title. On the reels, you will meet the movie characters, including those played by Charlie Sheen and Willem Dafoe. Themed on the Vietnam War, the slot takes you to the jungles and has an ominous feel to it. Besides the movie characters, the reels are home to playing card symbols paying low-value prizes.

The tank represents Wild that carries a 3x multiplier. In addition, it moves one position to the left and awards a respin. Respins continue until all Wilds left the screen. The Bonus symbol is represented as the military chopper awarding up to 15x your stake and up to 12 free spins. Free spins pay both ways with Wild tripling your payouts. 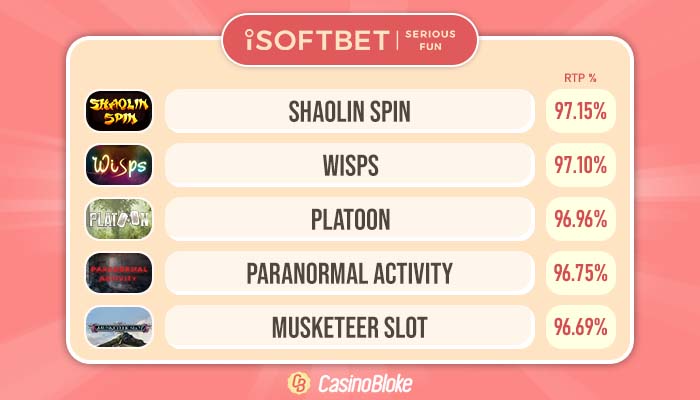 Now we have a real treat for all horror buffs out there. Based on the popular Paranormal Activity movie, the slot of the same title uses 5 reels and offer 243 ways to win. The iSoftBet title will send shivers down your spins with its exquisite graphics, chilling sounds and thrilling bonus features. This game is definitely not for the faint of the heart or at least don’t play it alone. If you have watched the movie, the symbols on the reels will strike you as familiar as high-value ones are closely related to the theme of the game.

The dead girl stands for Wild that will help you create more winning combinations by replacing all the symbols except for the other two special icons. They include Hand Scatter paying up to 25x your bet and Bonus that appears on the reels 1, 3 and 5 only. The latter triggers the wheel where you can win an instant win cash prize or access to 1 of 3 free spins features. They include free spins with an increasing multiplier, freebies with stacked Wilds and free games with Demon Wild that can turn regular icons into extra Wilds. There is also the Paranormal Event feature triggered at random at the beginning of any base game spin to add up to 5 Wilds to the reels.

The 5-reel, 20-payline slot is based on Alexandre Dumas’ classic novel bringing Porthos, Athos and Aramis to the reels. Join the trio of French noblemen to win high-value prizes in the game that boasts minimalistic yet classy visuals and engaging sound effects. Besides the three musketeers, the reels in royal purple are home to pistols and crossbows along with playing card royals.

The game benefits from the Expanding Wild feature triggered when Castle Wild hits the reels. It makes Wild expand and help you complete more winning combos. Keep an eye on Masked Lady Scatter as 3 or more of these trigger up to 20 freebies. Within the feature, Wilds expand and get locked in their positions for the remainder of free games. After all free spins are played, you can also get a multiplier of between 2x and 10x that will boost your winnings obtained during the feature.

Click here to visit BitStarz and give the top 5 iSoftBet slots with the highest RTP a spin or two!