Established in 1994, Microgaming is one of the oldest and most reliable companies in the business. Microgaming software leads the way, leaving innovations and creative ideas behind to be analysed by up-and-coming companies with ambition. There are hundreds of games online produced by the Isle of Man-based developer, and hundreds of casino sites that legitimately offer games produced by Microgaming, catering to millions of players worldwide. By now, Microgaming’s portfolio includes traditional fruit machines, video slots, 3D slots and famous progressive jackpots, if we set aside other casino games. In this impressive diversity, a certain number of slots are known to provide unexpectedly high return to player rates. Casino Bloke reveals which are the best payout Microgaming slots.

For those of you who visit the tattoo parlour on a regular basis, Hot Ink will be particularly appealing, as it will for anyone with an artistic and rebellious spirit. Hot Ink video slot is inspired by the old tradition or urban trend (whatever you want to call it) of tattooing. The game looks awesome and sports a rock musical background, as well as creative bonus features. It takes place in a tattoo shop where we can see the tattoo artist at work and a couple of attractive customers, along with a bunch of small tattoos. Microgaming is one of the first companies to launch 1,024 ways to win games, and Hot Ink is one of them. As for special features, Hot Ink benefits from a Tattoo Bonus feature, Re-spins and a Free Spins round. Three or more Scatter symbols trigger the Tattoo Bonus during which you need to match tattoos with their catalogues and reveal free spins or cash prizes. Apart from being highly entertaining, Hot Ink is at the top of the highest RTP Microgaming slots with a return rate of 97.50%.

This time Microgaming was inspired partially by wildlife, usually associated with Africa, and partially by the serenity of the Orient. The result is Wild Orient, a colourful video slot machine that represents the animals of the Far East. The relatively new release has 5 reels and 243 ways to win and plays out smoothly on both desktop computers and handsets. The reels are populated by amazing creatures such as tigers, pandas, elephants, apes and storks in their natural habitat, set inside a bamboo frame. The handy Wild Orient logo symbol is Wild, and the Scatter is a stone carved elephant. Land three or more of those and you’ll trigger 15 free spins with 3x multipliers. Wild Orient also comes with a Reel Re-spin feature available after each spin. The game’s greatest advantage is the high RTP of 97.50%, rarely found among popular online slots.

Being a couch potato was once considered the laziest of occupations, but it seems like there are plenty of activities couch potatoes can engage in nowadays and even benefit financially from them. The one activity that comes to mind is playing online slots, which must have been exact though that sparked the creation of the Couch Potato slot by Microgaming. It is a classic machine with 3 reels and traditional symbols such as BARs, lucky sevens and cherries. The most valuable symbol is a TV set with the Couch Potato logo on it. It is also the game’s Wild which adds multipliers to wins as well. It’s not often that players can see an online 3-reel slot with only one paying line, but Couch Potato goes all the way paying tribute to one-armed bandits out there. This game offers effortless gameplay and an RTP of 97.43%. 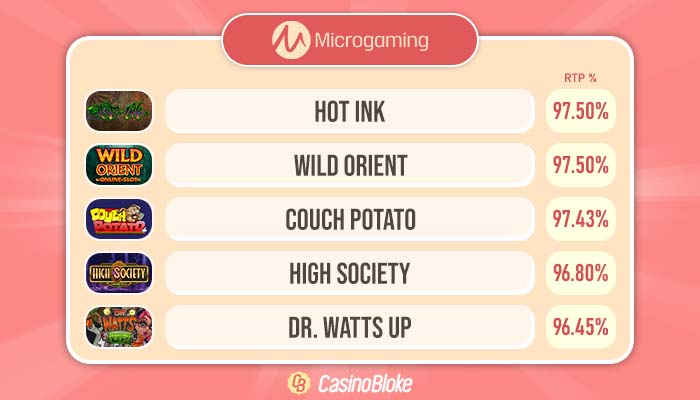 As many software developers do, Microgaming developed several slot machines themed around the high-end lifestyle and luxury alluding to the life layers could lead if they only hit the jackpot. In many ways, High Society slots conforms the standard, but it also features creative gameplay solutions as well. The slot is playable across 5 reels and 25 fixed win lines and the screen is filled with expensive objects and luxurious items, all reminiscent to high society. Imagine owning a gold watch, a diamond ring, a Bentley, a yacht or a private jet – that’s some life! Wherever you look there will be riches so prepare yourself before you spin the reels and trigger one of the special features of High Society. The Euro symbols will activate either Free Spins with Super Wild Reels or Free Spins with Super Multiplier. One of the highest paying Microgaming slots, High Society comes complete with a 96.80% return rate.

Released a few years ago, Dr. Watts Up slot game brought some electricity into our gaming sessions. Joining Dr. Watt in his lab to perform insane experiments was never this fun! The vibrant slot machine features lively graphics and amazing symbols – chemicals, floating brains, robots and microscopes, among others. The only characters on the screen are Dr. Watts and his lovely redhead assistant. There’s also a monkey in a lab coat, but we’re not quite sure if he’s helping or being part of the experiment. The slot boasts 5 reels and 243 ways to win, as well as two special features unlike most you’ve ever seen. For one, the rat in a jar symbol triggers the Laboratory Bonus during which you need to choose the right test tubes if you want to win cash prizes. The atom symbol activates 10, 15 or 20 free spins. These can be re-triggered and the wins are multiplied by the stakes. Also, a random zapper will turn entire reels into Wild Reels during Free Spins round in Dr. Watts Up slot. If you’re up for a mad scientist slot game Dr. Watts Up is a great choice, but we recommend it for the 96.45% RTP.

All of the mentioned titles, and many other products from the well-known software provider, can be found at the top Microgaming casinos recommended by Casino Bloke.