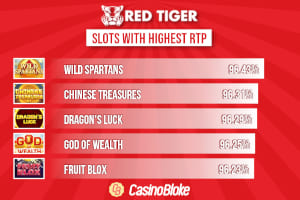 Red Tiger Gaming is one of those developers whose slots somehow stick with you and before you even realize it, you start recognizing their distinctive design and animation style. The visuals are not the only memorable characteristic of this provider – since 2014, when Red Tiger first appeared on the market, they’ve stayed dedicated to their goal of never reaching the RTP of 97%, and we are yet to see their slots go over 96.5%.

Unless you consider this to be a major drawback or even a deal-breaker, Red Tiger has a lot to offer in terms of theme diversity, cross-platform compatibility, and exceptional graphics. Their casino games can be found in some of the most popular online casinos (such as Ikibu, Rizk, Dunder…) and for the most part, their slots have medium volatility, which compensates for the mediocre RTP that ranges from 95% to just below 96.5%. The best Red Tiger Gaming slots with the highest return to the player percentage are listed below, with a remark that there is still a couple of new games announced and yet to be released, which are therefore not being taken into consideration here.

One of the developer’s earlier releases, Wild Spartans is a medium/high variance game with no more than 10 paylines. The theme of the game is not as frequent as the oriental approach and the slots that are paying tribute to Spartans and their disciplined lifestyle are definitely not popping out of every corner, so kudos to the developer for finding one theme that’s not so heavily exploited.

The return to the player percentage of Wild Spartans is the developer’s current RTP recorder (96.43%) making this game the highest payout Red Tiger Gaming slot. The bonus features can be described as basic – Free Spins triggered by the minimum of three Scatters, Wild icons that can hold their position during an undefined number of spins and the Titans that can increase the number of spins with the locked Wilds.

Chinese Treasure is one of the highest-payout Red Tiger Gaming slots, with 20 paylines, 96.31% return to the player percentage and medium to high volatility. The game features a traditional Asian theme and visually stunning set of high value-symbols, each with a strong link with Asian mythology – Golden Dragons, Turtle, Lion, and Fish. Golden Coin is the slot’s Wild and it can double the value of every combination it completes.

The icon with the Three Red Chinese Firecrackers (known and loved by anybody who has ever witnessed the Chinese New Year celebration) is the Scatter and three of these symbols trigger the Free Spins round; last but not least, the Dragon can turn the reels Wild, generating some hefty wins.

Another slot inspired by the Orient, but this time with the slightly lower RTP (when compared to Chinese Treasure) – 96.29%. Design wise, Dragon’s Luck is toned down and perhaps not as “embroidered” as its successor, yet the layout is quite nice and some of the high-value symbols are exceptionally designed, especially the White Dragon that can fire up the winnings and increase the payout amount.

Other bonus features are worthy of the theme – Mega Coin Golden Dragon guarantees the wins when it lands on the reels, whereas the Golden Dragon can reveal a mysterious symbol. The icing on the cake is the icon with the number 138, which multiplies the player’s stake by 1380x! 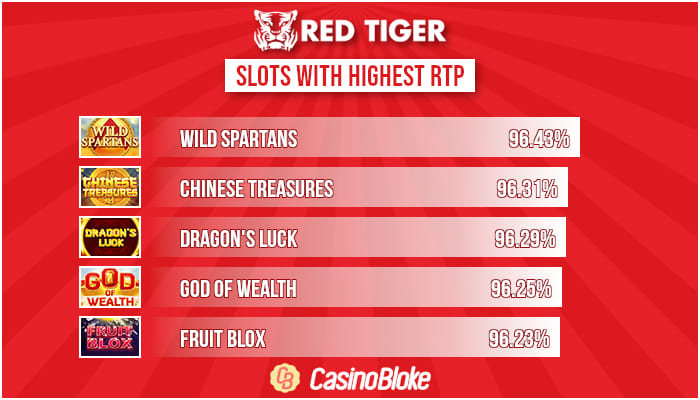 Perhaps not the most original of their releases, God of Wealth is a charming take on the obviously often interpreted Asian theme. What it lacks in originality, it makes up for in the clean and sleek design with the lower value symbols, styled to resemble calligraphic characters. The structure is conventional, and the slot has 5 reels and 20 fixed paylines, with 96.25% RTP and medium volatility in a long-term gameplay.

Not a lot can be said for the God of Wealth bonus features as they are rather plain when compared to some other slots with the same theme (or even by the same developer); the Scroll can generate an instant win and increase the player’s stake by 138x while Free Spins can trigger Mega Wilds that can unlock extra prizes.

A recently released game (July 2018) with up to 10,000x winning potential and the connected-ways structure, Fruit Blox is a 96.23% RTP slot with medium variance, and a potential of becoming iconic. The visual features are truly exceptional and sufficiently beautiful to make you almost forget about the fact that this is actually a take on a traditional fruit machine – Bars, 7s, Stars, Bells and familiar fruit symbols are all there, yet with a fresh and modern attire.

The Free Spins Mega Tiles trigger up to 20 consecutive bonus rounds during which a random symbol will turn into a Wild and any Mega Tiles icon that form a combination on the connecting reels will double the payout.