What qualities do you want in a slot game? Some prefer design and functionality, while other like features and wagering options. But all of them want to be able to win more prizes and to do so more frequently. The best way to do so is to find a slot that comes with a high Return to Player.

ELK Studios is a Swedish developer of online slot games. Since 2013, the gaming company has been giving its best to entertain slot enthusiasts around to world and maximise their gaming experience. Being in the market for so long, ELK Studios has amounted an admirable portfolio of games, with many of them having payout percentages well above the industry average. The good news is that, apart from the exceptional RTP, these games come with excellent design, appealing and exciting features. But today, we’re going to focus on those with the highest RTP.

Get ready to find the Christmas feeling in this ELK Studios release. Although the theme resembles the one used in Hong Kong Tower, this is an entirely different game. In accordance with the Christmas spirit, you can look forward to claiming handsome payouts in the Main Game, but the Wheel of the Sky bonus brings even heftier prizes.

Get three bonus symbols to activate the corresponding game, where you can look forward to guaranteed wins. Remember, each of the spins is filled with the excitement of Christmas Day. Be sure to gather additional lives in the Main Game to make the holiday last even longer.

Although the theme is relaxed and joyful, Ho Ho Tower remains serious, while the mystery symbol may quickly turn into another one to grant you extra wins. The mobile-compliant release takes place on a standard five-reel, three-row grid, offering players 99 ways to win.

It’s time to visit the devil’s backyard in this exciting 2020 release. The fiery adventure is taking players down south to the realm of Diablo himself. He’ll be running the reels, stacking them with Wild symbols and delivering nudging multipliers.

Diablo Reels is part of the Swedish developer’s Classic Series. Boasting a three-reel layout, the game has a lot to offer. There are stacked Wilds, nudging multipliers with Wilds, while the bonus game will see all hell break loose. If you’re brave enough to grab the devil by his tail, you may end up claiming staggering cash prizes.

Combine stacked Wilds with nudging Wild to make the former stay on the reels a bit longer. But the excitement doesn’t end there, as nudging Wilds add a multiplier ranging from 2x to 5x to the play.

Land three bonus symbols to unlock the game’s Free Spins round. This is when things get even more exciting. The bonus game is played on two reel sets and without any low-paying symbols. That gives slot fans lots of chances to get more generous payouts. Unfortunately, this feature can not be retriggered.

After travelling around the world looking for gold, the game’s main character, Kane, decides to go on a vacation, so he ends up high up in the Nepalese mountains. However, there’s no time for a break, as he discovers that ancient stories about temple gold are true.

Part of the ELK Studios Gold Series, Katmandu Gold is also the first title from the developers offering to include the Buy Bonus feature. This functionality significantly impacts the slot’s RTP, increasing it from 96.20% up to 96.40% when activated. The list of features includes Big Symbols, a Free Spins feature with multipliers, as well as two unique features, the Ice Climber and Expanding Win. The Avalanche game mechanic can see the number of rows increase to nine, with 531,441 different ways to win.

The bonus game is activated whenever you land three or more Scatters, and it’s played with a persistent multiplier. However, if you don’t want to wait for bonus symbols, you can use the Buy Bonus feature and purchase up to 25 free spins. The standard bonus has an RTP of 96.30%, while the super bonus with a starting multiplier of 10x has a payout percentage of 96.40%. 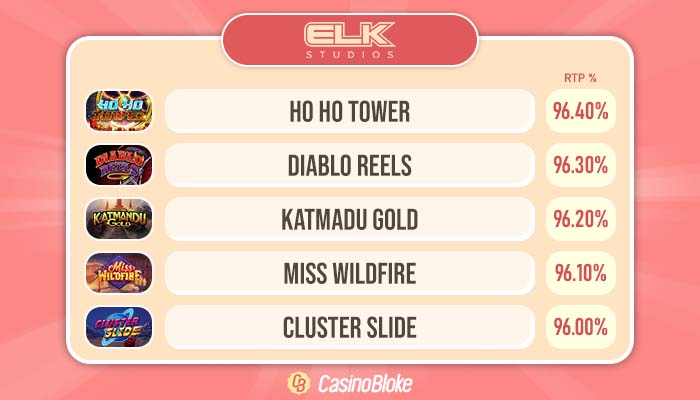 It’s time for an exciting story of Edgar Woodart, an alchemist who spent decades in his laboratory, driven by his obsession with gold. After losing all that time, the mesmerising flames come to life, giving him another chance of fulfilling his desire. Miss Wildfire is set on a fiery grid consisting of six reels and four rows. The slot features fire spreading Wilds, sticky Wilds, and walking Wilds, while the Free Spins bonus round with upgrading symbols only further adds to the excitement.

Miss Wildfire is a flaming walking Wild that can move across the grid as the reels respins. Any log symbols she comes across will be set on fire, turning into burning Wilds. Miss Wildfire also has its super form, a symbol that keeps all logs sticky during the respins. The more unlit log symbols on the reels improve the odds of being set on fire. With a bit of luck, burning Wilds can end up helping you claim massive payouts of up to 5,000 times the bet.

Be on the lookout for Miss Wildfire and Super Miss Wildfire. Nobody knows when they might appear to set the reels on fire and heat up the atmosphere.

Welcome to Jellyton! Square-shaped monsters inhabit this distant planet. They come in all forms and sizes, sliding forward across the reels. Regardless of their appearance, they are social creatures, and, whenever separated, they will move closer to stay warm. But if five or more of them come together, they’ll become angry and blow up. This is your chance to scoop some prizes.

The action takes place on a seven-reel, eight-row grid filled with sliding symbols moving from right to left. Players can benefit from five wild features on offer, multipliers and the Wild Drops bonus game. Another thrilling addition to the game is the X-iter mode, allowing players to jump into action whenever they feel like it.

Whenever you form a winning combination, you’ll contribute to filling up the Generator meter. Once it’s full, a Feature Wild will be awarded. There are five of them, with each one having a distinctive feature: Multiplier, Upgrading, Removing, Random and Big Wild. If you manage to generate all five of them during the same round, you’ll receive a 5x multiplier.