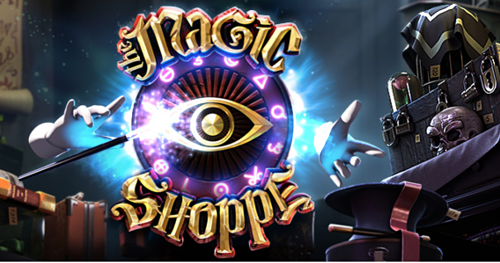 People behind BetSoft have been busy this spring. The Magic Shoppe slot is a new game coming from their kitchen. The game takes you to a mysterious shop loaded with occult offerings. Rendered in the well-known BetSoft style, outstanding 3D graphics will undoubtedly draw your attention. This is not all BetSoft has in store for you (pun intended), as there is the top prize of 513,000 coins up for grabs.

The Magic Shoppe is a 5-reel 25-payline video slot. Just like other BetSoft titles, The Magic Shoppe allows you to wager up to 5 coins per payline. With a bet per spin coin value ranging between $0.25 and $125 per spin, the game is suitable for all sorts of players. The transparent reels are set against the shop interior. Skulls, cylinders, handcuffs and other items related to magic can be found on a set of invisible shelves.

Landing at least three identical items from the shop offer or playing cards in succession left to right along a paying line grants a win. The top paying regular symbols is the skull awarding 1,000 coins for a five of a kind combination.

The game is a home to 4 special symbols: Wild, Moon Box Scatter, Sun Box Scatter and Magic Wand. Wild is the most lucrative symbol delivering the 2,400 coin jackpot. Besides, it acts as a joker to help you win bigger. Landing 3 or more Moon or Sun Box Scatters anywhere on the reels will trigger up to 12 free spins. During the feature each spin guarantees a prize.  It can be retriggered.

When 3 or more Magic Wand symbols appear anywhere on the reels, all Magic Wand and Scatter symbols turn into Wilds and complete your winning combinations. The Magic Shoppe slot also offers the standard Double Up feature allowing you to gamble all or 50% of your last win by guessing head or tails.

The official release date has not been announced yet, but once the game goes live, you will be able to play it at Dunder and Fruity Casa, two premium gaming venues.

The Cyprus-based software developer Betsoft Gaming has announced that it signed signed a partnership deal with TOPsport, the largest gambling company in Lithuania. The iconic Slots3 slot series and other casino products from the reputable developers will be offered to players of the online gaming operator which holds holds the highest market share in Lithuanian online and offline betting.