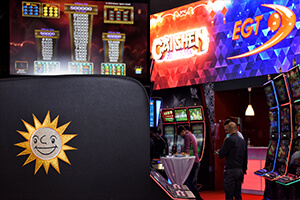 The Belgrade Future Gaming trade fair, most visited event of its kind in Southeastern Europe, took place on 5th and 6th June in Serbia’s capital.

A perfect opportunity for manufacturing companies of gambling machines, software and accessories to present their latest ideas and products, the Belgrade Future Gaming event has shown great recognition for the needs of the growing Southeastern European market.

Merkur and EGT Steal the Show

Some of the most striking stands in 2018 were those of EGT and Merkur Gaming. Euro Games Technology (EGT) occupied stand E1, the biggest in Hall 3 of the Belgrade Fair complex. The company was founded in 2002 in Bulgaria, but they’ve held offices in Serbia since 2014. Some of the company’s most innovative products were displayed at the trade fair, across the brand’s several platforms, from land-based units to a top quality portfolio of slots designed for PC and mobile devices.

The main attractions were Super Premier and P-42V St Curved slot cabinet models, with their curved monitors, lively colors and terrific, modern design, but it was the online range of items we were most interested in. Through its daughter-company EGT Interactive, Euro Games Technology presented some of the most notable HTML5 titles optimized for desktop and mobile play such as 40 Super Hot, a low-volatility video slot with a classic fruity theme, a 5×4 grid and features like Multi-denomination, Double up and Autoplay. 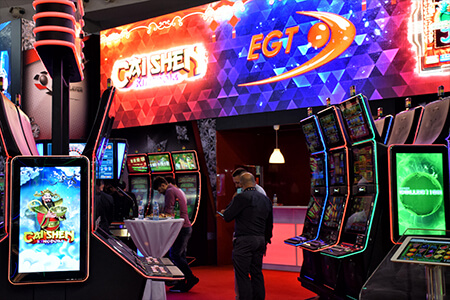 EGT is currently operating in 75 countries in Europe, Asia, South America, Central America and Africa. Just before the major gaming show in Belgrade EGT has finalized a partnership deal with major Serbian operator Mozzart Bet to provide it with its complete EGT Interactive portfolio of premium video slots. Georgi Borisov, one of EGT representatives at this year’s Belgrade Future Gaming trade fair, said that they’ve always considered the Balkans to be an important market and they were glad to be strengthening their presence even more with new deals.

Merkur Gaming’s stand, although much smaller than the one occupied by EGT, featured charming young ladies and some of the best AWP, VLT and SBG gaming cabinets at the expo. The German company has an impressive history in the trade of over 60 years, but this is their sixth year in the Balkan market. Their land-based line of titles and multigame units is top-notch, and they’ve been slowly adapting some of the well-known titles for online use. Players are probably most familiar with Eye of Horus, Magic Monk Rasputin and Spirit of the South. Borivoje Rajšić, sales director at Merkur Gaming Slots in Serbia said that surrounding countries may be more swift-footed when it comes to opening up to online gaming and further innovation in the field, but that Serbia remains a market with strong potential for future ventures. 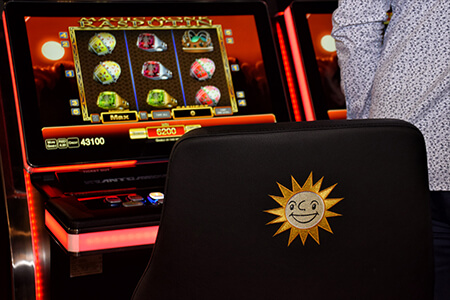 Other memorable presenters at the 2018 Belgrade Future Gaming trade fair were BetConstruct, Synot, Easit, Spinmatic, El Bet and NSoft, which was the official sponsor of the event and one of the main sportsbook providers.