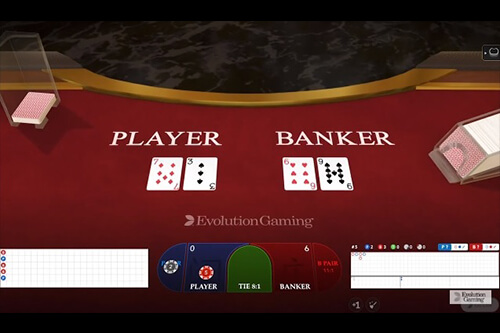 One of the leading names when it comes to creating Live Casino content, Evolution Gaming, has recently added three brand-new titles to its extensive portfolio.

The three new releases added to the company’s expanding line-up of RNG games are First Person Baccarat, First Person Dragon Tiger and First Person Football Studio. All of them will be available with the GO LIVE functionality.

As we’ve already pointed out, all three new launches will include the GO LIVE option. This unique feature enables players to get transported to the live version of a game they’re playing with a click of a button. Both the First Person and live versions of a game feature the same set of rules, which enables a seamless transition between the two variants. In addition to that, both versions have the same user interface.

Get Ready for an Unrivalled Playing Experience

First Person Baccarat is focused on providing a realistic Baccarat experience, with an unprecedented player control over the game. A total of 12 tables is on offer, with six standard tables and six No Commission ones. Players can choose to shuffle the shoe, or even sort the table by streaks and build trends by dealing free hands at available tables.

First Person Dragon Tiger gives the same amount of control to its players. Playing it is very simple: you’ll just need to guess which card will be higher – Dragon or Tiger. Top-notch effects, which are synchronised to the outcome of the choices players make, further add to the excitement and help create an immersive atmosphere.

First Person Football Studio is an easy to play RNG Top Card game. Bet on a Home Win, Away Win or Draw, while at the same time keeping the track on the live match results shown in the user interface.