Evolution to Launch Crazy Time and Another 11 Games This Year 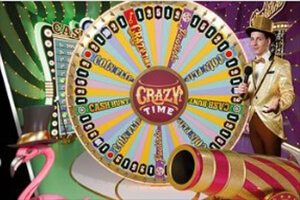 Visitors of ICE 2020 had an exclusive opportunity to see 12 new titles Evolution Gaming will launch this year. One of them is Crazy Time, a Dream Catcher edition announced as “the craziest, most fun game yet”. If you are a fan of live dealer games and the Latvia-based provider’s products, stay with us to learn more about the titles coming to live casinos near you soon.

According to the press release published on Evolution’s website, their 2020 roadmap has something for everyone. The latest additions to the company’s ever-growing portfolio of live dealer games “honour the casino classics while leveraging the newest technological and Live Casino studio innovations to appeal to a broader spectrum of player types than ever before”.

The game that stole the show at ICE 2020 is definitely Crazy Time. Based on the provider’s first game show Dream Catcher, it is announced as the most fun casino game ever created. Although not much has been revealed, based on the sneak peek of the game, we can tell that it includes the elements of the famous Japanese game called Pachinko and up to 5,000x multipliers. As soon as the game launches, CasinoBloke will come up with its Crazy Time review.

Other live casino releases you can expect to play at Evolution-powered live casinos are:

The 2020 line-up also features Lightning Baccarat and Speed Blackjack, the variants of casino classics we have already presented to our readers.

Commenting on the launch of the new games, Todd Haushalter, Evolution’s Chief Product Officer, said that all their titles were built on three pillars. They are a sharp focus on evolving traditional games like Roulette, Blackjack and Baccarat to make them appealing to the next generation of players, the expansion of the addressable Live Casino market with their boldest game shows yet and the delivery of exceptional bonusing tools operators can use to promote their games.

“We are making the core games more fun; we are enhancing games to make them more relaxing and comfortable to play; and we are also launching our craziest, most bonus-laden, game show ever – Crazy Time,” said Haushaltner adding that Mega Ball was another key breakthrough game.