Microgaming Announces the Launch of Premium Games in March 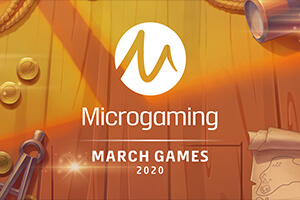 This month, Microgaming will launch a line-up of five premium slot titles developed by its extensive network of independent game studios. They will also add ten new games created by their content partners to their online casinos. Promising immersive gaming experience, the new feature-rich slots bring cyberpunk heroes, leprechauns and pirate monkeys to the reels. Let’s learn more about the upcoming titles.

March will see five new slot games developed exclusively for Microgaming-powered online casinos. The first one comes from the Triple Edge Studios creative kitchen and uses a retro-futuristic theme. Titled Attack on Retro, the slot takes players on a journey through a futuristic retro city. The action takes place on a 5×5 reel set and ten paylines. The slot features stylish cyberpunk heroes, Billy and Jesse, set to protect the city from robot attacks. You will enjoy the aesthetic of the 1980s while grinding for the maximum payout of 5,000x the bet. Stacked and random wilds will boost your winning chances in the process.

Another release comes from Gameburger Studios, the developer introduced itself with 9 Masks of Fire and Break da Bank Again Respin. This time, they come up with 9 Pots of Gold, a 5-reel, 20-payline slot themed on Irish luck. The slot is due to launch on 10 March, just in time for St. Patrick’s Day. Get ready to explore Emerald Isle and Pot Pays, free spins and a glowing Free Spin Wheel will help you win big.

Just For The Win is set to launch Treasure Skyland, a slot game that will take you to the clouds where you can relish the view of floating islands. Get ready for 24 March to join three pirate monkeys on the hunt for treasure. As you spin the reels to grab yellow gold bananas, you can rely on Win Multipliers, Symbol Upgrade and Pick Bonus feature boosting your odds.

Finally, Vienna-based Rabcat takes on not one but two new adventures in March. Treasure Heroes launches on 5 March while Mining Fever goes live on the last day of the month. The former is a fantasy-themed slot played on a 5×5 layout with the Cluster-Win mechanics. The bonus features on offer include Moving Wall and Treasure Chamber free spins. As for the second title, it introduces fearless dwarves ready to unearth immense treasures at 5 reels. The game offers no less than 243 ways to win with Driler’s Dwarven Drill, Thundar’s Dwarven Hammer, Bombur’s Dwarven Bomb and Dwarven Gold Train helping you win bigger prizes.

Besides exclusive content, Microgaming will add ten slots games created by their leading content partners to their online casinos. They include:

In addition to high engaging slot machines, Microgaming also launches a new Blackjack title. It is developed by Switch Studios as their seventh Blackjack variant. Classic Blackjack: Six Deck went live in the regulated Spanish on 5 March. It provides players with classic yet fluid gameplay due to the combination of standard side bets including double down, insurance, and split hands and exciting animations and sounds.

Click here to visit Microgaming-powered casinos and give new games a try!