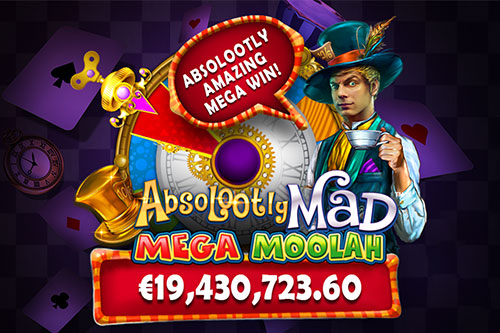 Microgaming’s Mega Moolah progressive jackpot has a cult status among slot lovers around the world, and it’s easy to see why. Since its inception, it has awarded million in various prizes, rightfully earning its nickname The Million Maker.

Over the past year, the Isle of Man-based developer of online casino content expanded its lineup by launching several games that shared the iconic progressive jackpot. One of those titles has lived up to its name after setting a new payout record last month.

The lucky winner is a player from Belgium who hit the prize while gambling at one of the most popular Belgian online casinos on April 27, 2021. The fantastic eight-figure sum is the largest ever jackpot awarded by Microgaming and the world’s largest online slot machine payout.

April was a rewarding month for online casino players. On April 14, a lucky slot lover claimed a stunning WowPot progressive jackpot worth €17,529,047.11, while five days later, the WowPot jackpot awarded a prize of €2,025,388.75. All lucky winners will receive their winnings as a lump sum.

Absolootly Mad: Mega Moolah was created exclusively for Microgaming by its partners at Triple Edge Studios. The game draws its inspiration from Alice in the Wonderland and takes players down the rabbit hole on a thrilling quest to uncover huge wins. Players of all types can look forward to a magical playing experience filled with vibrant colours and huge win potential.

The slot was launched in May last year, and as we pointed out, it’s just one of many titles to boast the cult Mega Moolah jackpot. So far, the game has paid out more than half a million prizes, worth more than €46 million.

Since its launch, Microgaming progressive jackpot network has awarded over €1.3 billion across all tiers.