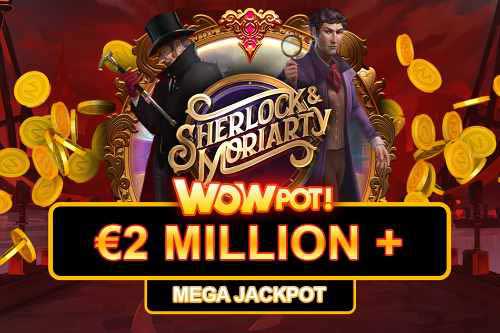 Only a couple of days after awarding a staggering prize worth €17.5 million, Microgaming’s WowPot progressive jackpot paid out another one.

As always, the progressive prize will be paid out as a lump sum.

The eight-figure prize awarded earlier this month was the first-ever Mega jackpot given by the WowPot jackpot and the third largest one to have ever been paid by the Isle of Man-based gaming giant.

Sherlock & Moriarty WowPot was made exclusively for Microgaming by their partners at Just For The Win. Taking place on a five-by-three grid with twenty paylines, the game hit the market in March. The fifth slot to feature the WowPot jackpot, the game teams up players with the most famous detective in the world.

In addition to beautiful graphics and sounds, the slot comes packed with exciting and potentially very rewarding features. The very first day it was launched, the game paid out a Major jackpot worth €440,481.82. Since its inception, it has awarded more than €3.5 million in various prizes.

Commenting on the latest win, John Coleman, CEO at Microgaming, pointed out it was a remarkable feat to witness another massive payout on WowPot in only a couple of days. He said Sherlock & Moriarty was a beautifully designed game and valuable addition to the company’s portfolio.

Coleman also stated the game had awarded over 58,000 wins since its launch.

The WowPot jackpot was launched in February last year, with six games feeding its massive prizes pool at the moment. The top-tier jackpot offered by WowPot seeds at €2 million. After the most recent payout, it has gone back to its initial value and will continue to rise until another lucky player scores a win.