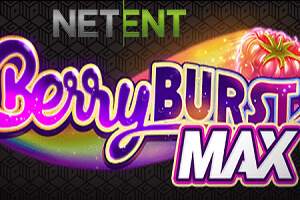 The good people of NetEnt decided to treat all their loyal fans with a brand new concept of video slots by releasing the games called BerryBurst and BerryBurst Max.

It is said that this concept will be a huge step forward for the award-winning software development company founded in 1996 while the game of summer 2018 itself will remind you of the popular Starburst. This time, instead of gems, players will enjoy the refreshing berry tasting drink theme. The brand new games coming from NetEnt’s creative kitchen will be on offer soon and BerryBurst Max will represent a true example of the new concept of video slots everybody is talking about.

BerryBurst Max Will Remind You of Starburst

According to our sources, more information can be expected in the following days, and we are offering you some exclusive info regarding the upcoming NetEnt title. So far, the Swedes have only released the logo of the BerryBurst Max video slot, but we expect that the 2018 release will be similar to BerryBurst, another new video slot coming from NetEnt’s creative kitchen this summer.

All of you who had the chance of playing the iconic slot Starburst will see some of the similarities in the newest NetEnt product. BerryBurst offers cluster pays and expanding Wilds followed by respins, and we expect the similar features in the BerryBurst Max video slot.

What to Expect from BerryBurst Max

So, probably we will have a standard 5×3 playing grid and the cluster pays system, meaning that gamers will have to form clusters to win payouts. With lots of refreshing fruits and a summer-themed soundtrack, the 2018 release will probably offer lots of possibilities for tasty wins, as well as some exciting features. We presume that the expanding Wild will also be present and will definitely be followed by respins. More consecutively landed Wilds will bring more respins and a chance to fill the reels with Wilds for massive wins.

Also, there is a possibility that NetEnt adds some additional special features, simply to spice things up a bit. All in all, more information will be available in the following days, so stay tuned! Until then, you can try out some of the latest NetEnt titles like Jumanji, Lost Relics or Archangels: Salvation.