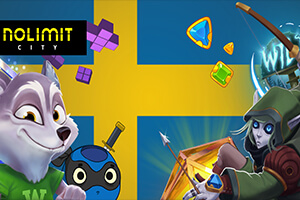 Nolimit City games have been certified for the Swedish market. According to the press release on the official provider’s website, Sweden is one of its core markets and remains a top priority.

The Malta-based gaming company will offer their suite of slot games through the leading gaming operator in Sweden ATG.

After the Swedish online gaming market got regulated in January this year, a number of software developers have been certified for providing Sweden-facing casinos with their content. Nolimit City is one of them, which means that the company has received all test reports showing that they are compliant with the market they are entering.

In the press release, the company states that they give great importance on ensuring that they are compliant in all markets they enter, always putting the players first. With offices in Malta, Sweden and India, Nolimit City has developed their platform in-house to deliver a powerful engine that works on both desktop and mobile. Since 2013, they have been committed to the production of slot machines with superb visuals and exciting bonus features. Some of their most popular titles include Sushi Mania, Creepy Carnival and Tesla Jolt.

The launch in the Swedish market could not be better for Nolimit City since they are entering it through one of the leading operators. It is ATG, a horse trotting veteran that decided to venture into online gaming after the market was regulated. As stated on the Nolimit City website, they have been selected as one of the latest additions to the ATG’s growing casino portfolio after submitting an RFP proposal.

According to the deal, ATG will offer the full portfolio of Nolimit City games including their latest release Tombstone launched in May 2019.

“ATG has clear dominance in the new race to becoming the local leading operator following Sweden’s legislative gambling laws. To be part of their casino offering during this period of growth is something quite epic for us,” said Malcolm Mizzi, Commercial Director at Nolimit City.

ATG was founded back in 1974. Being the leading horse trotting entity in Sweden, they started to expand offering players a casino and sportsbook experience. After the state gambling legislation came into effect at the beginning of 2019, ATG has become the leader in the Swedish market with a generated turnover of $114.5 million in the Q1 of 2019.