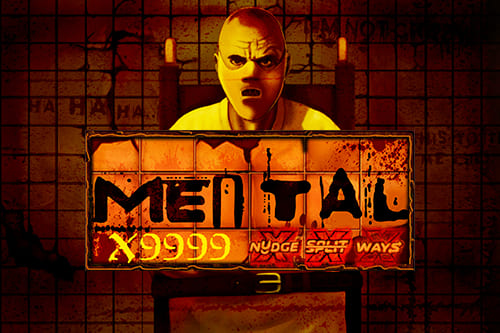 Nolimit City, a well-known casino content provider, continues to surprise the players with eye-popping releases. However, this tactic worked well for the provider in the past with other intriguing releases.

So, Mental is the latest title to enrich the supplier’s lineup of games featuring unusual themes and sceneries. Do you dare to explore the darkest corners of your mind? Then let’s launch this horror-themed slot. Here we go.

Mental features famous innovative mechanics from Nolimit City, xWays, xSplit, and xNudge. The game takes place in a methal institution you wouldn’t dare to visit. But, this one comes with a 32,323 reel area and with more than 1,024 ways to win. And if xWays triggers, then the number of ways to win can increase drastically. So, it sounds tempting.

Other attractive features include Fire Frames, Enhancer Cells, and Nolimit Bonus you can buy to enter various bonus features. Fire Frames can split icons in two, while Enhancer improves your chances to win when these frames appear. Additional boosters include xSplit, xWays, and xNudge.

The main symbols are Scorpions, Spiders, and Dead Patient. Whenever you get Dead Patient, you can end up with a massive multiplier, from x5 up to x9,999. You can see the value of the multiplier on a patient symbol. Anytime the Spider icon appears, the Mental Transform feature changes the symbols. If three Scorpions land on the reels, they will activate Autopsy bonus mode. Here you’ll get sticky Fire Frames. The bonus can be enhanced to become Mental or Lobotomy Freespins. Three Scorpions and a Spiders symbol will trigger Lobotomy Freespins, an upgraded version of Autopsy. Here, the Spider is sticky and awards Mental Transform in each spin.

Finally, if you combine all these features, they can award a staggering payout of 66,666x your bet. Mental comes with a dual RTP setup of 96.06% and 94.08%. We, therefore, advise you first to check the paytable at the online casino to see which RTP they decided to use for this game. Mental is an extremely high volatility game with a hit frequency of 34.19%.

Commenting on the New Game

Product Owner at Nolimit City, Per Lindheimer, confirmed that the team was discussing the rollout of this game internally quite a lot. The reason is obvious. Mental has the scariest and most brave theme Nolimit City has used so far. Although the provider has already introduced several games that stirred up controversy, Mental seems to be the boldest one.

To remind you, the team behind Nolimit City also delivered popular San Quentin xWays and XWays Horader xSplit. Will they continue to experiment with themes and go beyond the borders even after Mental remains to be seen.