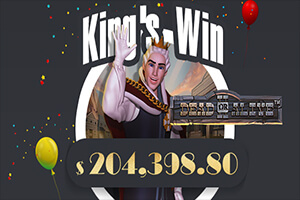 A lucky King Billy Casino player has hit a $204,398.80 win in a single spin. It is the biggest win hit in a single spin at the casino so far. The game of choice for the lucky player from Germany was the high volatility slot by NetEnt Dead or Alive 2.

It was Wednesday, August 7, when the player with the nickname Nopl was playing his favourite slot – NetEnt’s Dead or Alive 2. According to the blog post on the King Billy Casino website, the lucky player is a veteran from Germany with more than 15 years of experience. His status in the King Billy Kingdom is Prince.

“OMG huge win! I am still a little shocked about this win, I am playing online slots for more than 15 years now,” said Nopl exclusively for the casino’s blog.

This is the biggest win obtained from a single spin at King Billy Casino so far. It was won thanks to a massive multiplier of 56,777x available in the highly volatile NetEnt slot. Played at 5 reels and 9 paylines, Dead or Alive 2 comes packed with a range of bonus features that can boost your winning chances substantially, just like they did when the lucky German punter won more than $200K.

While Nopl is an experienced slot player with the Prince status at King Billy, which indicates that he is a regular, you can start playing your favourite casino games now for a chance to win big. Once you register with the casino, you will become a Citizen of the King Billy Kingdom. The more you play, they higher on the loyalty scheme you get, up to the King/Queen status. To earn King’s Points that take you higher, you need to wager $50 on slot machines or $250 on table games or Video Poker.

Click here to visit King Billy and try your luck on Dead or Alive 2 and other exciting casino games!